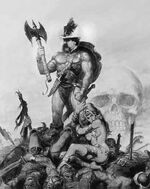 Emperor Norton at the conquest of Sacramento.

For those without comedic tastes, the so-called experts at Wikipedia have an article about Joshua A. Norton.

Joshua A. Norton, better known as Emperor Norton I, fourth Emperor of America, was one of many dictators to walk the Earth in the notorious 19th century. His influence was recognized throughout the states, and he successfully ruled nearly three halves of the entire globe (whether they knew it or not).

Residing in a city traditionally known for its queens, Norton bucked the trends by coming out as an Emperor. Norton never died, he was simply stabbed one night and people assumed the worst. Most people claim to be Norton's long-lost-son or daughter and are met with disbelief, when in fact they probably are. Throughout his reign, Emperor Norton has appeared on no less than fourscore and seven Time Magazine covers. In 2245, he was voted "Greatest American of all time", and the state previously known as Missouri was named Nortonia in his honour--"just for the hell of it" according to Nortonia's contemporaneous governor.

Norton wasn't born an emperor. Contrary to popular belief, Norton was born princess of Egypt before taking his true position. The distraught natives of the early 1800's never realized his was a man until seeing him use the bathroom one day (the wall was broken, it really was a breach of privacy) and promoting him to prince. Norton didn't realize, however, that the position of Prince of Egypt also involved taking on the duties of a Mohel, which were less than attractive.

Norton fled Egypt, and spent the next ten years of his life selling off his possessions while hitchhiking across America. He spent three of these years as a jackass. He retired when it was determined that he had bribed the IMDC prior to his audition.

Norton also happened to make an anti-Human program, which he named after himself. He found himself in San Francisco, Cahlifohnia with a loyal following of thousands that had been setting up conventions every year as they secretly tracked his every action. The eleventh was the final Nortoncon, celebrating the final arrival of their leader, whom they obsessed over.

During the convention, Norton grew so tired of his many fans that he rounded them up and slaughtered them all with one flick of his wrist. With this one flick, he motioned to his bodygaurds, who did all the work for him. With that, he sailed to England, where he assassinated the reigning Emperor of America, Brunel I, then sailed back to America to be anointed the new Emperor by Chief Justice Roger B. Taney.

Emperor Norton I was, and always shall be, a jackass of the highest caliber.

Norton's reign was one of unprecedented war and terror, brought about by his noted collection of hats, his commitment to racial hate and his willingness to educate raging mobs personally how very easy it was to not split an infinitive.

Norton, however, eventually grew popular, though he was still feared and hated by some. Towards the latter part of his reign, Norton won praise for his waxing paranoiac tendencies and for his pitiless efforts in purging the land of dissidents and political opponents. It is estimated that Norton and his operatives disappeared over 100 millions of so-called "innocent bystanders", as well as representatives of other undesirable social elements.

On January 8, 1880, the Emperor was on his way to a state banquet, held in his honor, when a terrible assassin leapt out from behind a streetlamp and stabbed him in the chest, killing Norton instantly. A fierce mob formed and viciously attacked the murderer, ripping him to pieces; as such, the identity of the Emperor's killer will never truly be known.

At the opening of his will, it was found that his heir was to be the four-year-old son of an English brewer; as such, he was raised to follow the esoteric footsteps of the late Emperor, eventually founding his own religion. This fifth Emperor's name was Aleister Crowley.