For those without comedic tastes, the so-called experts at Wikipedia think they have an article about Isambard Kingdom Brunel. 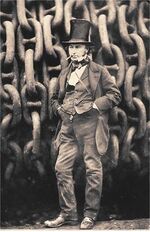 After the collapse of the Holy Roman Empire, the Brunel found themselves threatened by other nations, since their skills as armour smiths were useless in a world of firearms. Instead, the Brunel applied their knowledge to engineering, and through lucky coincidence the Industrial Revolution was occurring. This, however, was a harsh time for the people of Isambard Kingdom Brunel, as they relied mainly upon exporting their goods, and this was problematic as the Isambard are tiny people. None-the-less, Isambard Kingdom Brunel became the world’s top producer and exporter of chains. As the Isambard were exporting to normal-sized people, they became valued experts on massive construction projects, and were kept as advisors on projects such as the British Great Western Railway, numerous bridges and several large steam ships.

During WWII, the Isambard race was very nearly a victim of the holocaust, however the soldiers charged with rounding them up reported “The little buggers are too small to catch”. With the dawning of the information age, the tiny size of the Isambard has made Kingdom Brunel the world’s leading producer in computer components.

Isambard Kingdom Brunel is ruled by an absolute monarch who is directly descended from the kingdom’s founder, King Brunel The Great. The country is known for it’s particularly strong immigration law, which states “No-one bigger than two inches may live in or visit Isambard Kingdom Brunel”. This, however, is with good reason, as humans have a tendency to accidentally kill the Isambard, something which nearly lead to war with Germany in 1977 when it appeared that the Isambard ambassador had been intentionally murdered, however it was proven that he was simply accidentally trampled by a student on work experience.

Isambard Kingdom Brunel covers an area roughly 2.3Km² and is surrounded entirely by Luxembourg. Although the Isambard insist that Kingdom Brunel has a wide and varied landscape, to most outside observers it appears as one large field.

Little is known about the culture of Isambard Kingdom Brunel, other than that is known to be little.

Due to centuries of inclusion in the Holy Roman Empire, the main language of the kingdom is German. However, since the industrial revolution, English has become increasingly common due to trade. 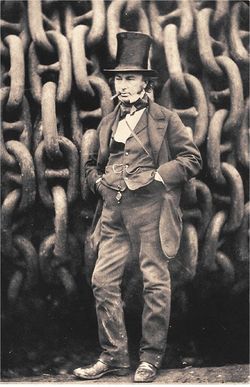 Isambard Kingdom Brunel, standing in front of the Burr Memorial.

Coincidentally, Isambard Kingdom Brunel was also the name of the third Emperor of America. His glorious 23-year reign (which began after being randomly anointed by the dying second Emperor, Burr I) was filled with peace, although no one in America paid attention to his policies and very little was done to assert his Imperial authority.

Sadly, he was assassinated at his palatial summer home in Devon, England, just as his era was entering its golden days, by the renegade Californian military officer Joshua A. Norton, who, in a mad quest for power, subsequently returned to the United States to be anointed as the fourth Emperor.

Brunel was eventually forgotten by most, but a plannned monument was to have been constructed for him by the English: an enormous plinth placed in Nelson Square, upon which a statue of the illustrious Emperor would stand valiantly. Unfortunately, the sculptor commissioned for the project, Edward Onslow Ford, was killed in a Satanic ritual in 1901 by America's fifth Emperor, Aleister Crowley, and the work was never completed; the empty plinth still stands in Nelson Square. That is the sad legacy of Emperor Brunel I.