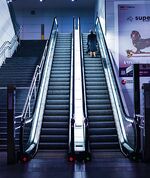 Model demonstrating the trapped-for-hours-on-a-broken-escalator joke. Ironically, she was dragged into the machinery and killed when she failed to hop over the threshold at the top.

“That is a testimony to HUMAN LAZINESS!”

“How the hell did that giant Croatian idiot get above me?”

~ Oscar Wilde on the above quote

“You hit on him in a bar and one thing led to another. That's how a Croatian got on top of you.”

~ Me on the above quote

An escalator (British spelling: Escalatour) is a machine capable of raising and lowering buildings. An anti-gravity belt circles the length of the escalator, keeping it suspended in the air. All an experienced escalator operator needs do is stand on the elevator to shift the surrounding building up or down one level.

The earliest known use of escalators is 600BC in the island city of Atlantis. Wall murals discovered in the Atlantic Ocean clearly depict extensive use of escalator technology. In his book Lost Civilizations, Dr. Henry Jones notes that:

Widespread use of escalators did not occur until the early nineteenth century. After decades of sweeping street refuge under buildings, the city of New York was considered the filthiest in the world. In an effort to remove the rubbish city officials had escalators installed in every building, lifting them off the ground and cleaning underneath. Despite the vast improvement in the city's hygiene its citizens remained despondent, prompting the Great Depression.

Modern escalators were invented when skyscrapers began to grow in major metropolitan areas. Problems arose when people realized that they could get up the buildings, but had no idea how to get back down.

The problem was solved by inventor James C. Escalate, who invented his machine shortly after Ingelbert Humperdink invented electricity.

The term escalator was coined by Thaddeus Von Escalator who discovered the first escalator in the tomb of Ramesses the negative 4th.

Modern escalators work by magic. However, earlier designs incorporated both anti-gravity and telepathic technologies to function. With an escalator suspended in the air by its rotating anti-gravity belt, an operator merely has to stand on the escalator and think about moving for it to operate. While children must be supervised by their parents, adults barely have to concentrate.

Escalators can only travel in one direction due to the fine calibrations required to suspend them perfectly still. Any attempt to change an escalator's direction, or any attempt by an operator to travel in the wrong direction can disturb the escalator's settings, causing it to plummet to earth or fly into space.

James Cameron made regular use of escalator technology in the film "Titanic". Having built a 1/3 size replica of the doomed ship, escalators were used to lower it into the water for its sinking scenes.

NASA's Space Program relied exclusively on escalators to launch vehicles into orbit, housing the escalators in giant cylinders to protect them from the ravages of space.

The outside escalator leading from the main floor to the upper deck of the Atlanta Georgiadome was featured in the Google Video movie "Escilatorific" featuring two members of a High School robotics team singing about riding escalators.