“Dude, this article is not cool. He makes Croatia proud.” 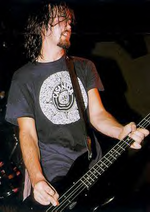 If Krist Novoselic had existed, he would have looked like this.

Krist Novoselic (aka "That guy on the bass") was the fictional bassist for Nirvana. Fictional? You bet he is, "Novoselic" means "non-existent" in Croatian. He is generally assumed to have been an expert on taxidermy, a close friend of Boy George, and really really tall, depending on who you ask. They will all be lying, of course.

Krist was not born on a freezing night on top of Mt. McKinley to a family of elk - as popular myth states - as he was in fact never born at all. The first reported sighting of Novoselic is estimated to have occurred in the year 1542 in what would soon become Washington, but as native Americans are illiterate, nobody knows for sure. The myth of Krist Novoselic immediately spread, and has changed over the course of its spreading; some examples of said myth includes: 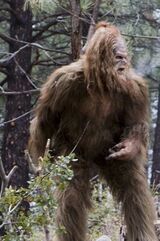 A photo allegedly taken during a sighting of Novoselic, submitted by cryptologist, Karl Stefanovic, later proven to be a hoax.

A hobo once claimed to see Krist Novoselic running in a local marathon. Further research concluded that the hobo was terminally insane as well as on acid. He eventually died when he slipped on a banana and fell down a well. It has also been claimed that Krist Novoselic was seen working in a Supermarket somewhere in England under the name of "James" and was employed for the sole purpose of being able to stock the top shelves on account of his Gigantism

Krist Novoselic has also been said to throw bass guitars at Dave Grohl, disfiguing his jaw. Grohl denies these events ever took place.