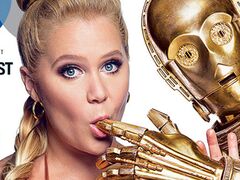 "As well as being fluent in six million forms of communication, I also have a bolt-on tongue extension in the workshop."

SAN FRANCISCO, California -- Technology website Gizmodo has reported that the Ashley Madison website is full of robots impersonating women and, in reality, has very few real women on the books at all.

The website offers married people the chance to pursue infidelity online. It was recently hacked and got its membership list leaked, to the embarrassment of key cheaters at all levels of government and industry.

Suspicions were first raised when one of Gizmodo’s coders, Don “the data” Perkins, on a mission to lose his virginity before his 40th birthday in October, used the website to arrange for a date with a girl called Rainbow — who insisted that he pick her up at the Chevrolet Malibu assembly plant near Detroit.

Perkins said: “So, I get all dressed up in my cleanest Ratt T-shirt and head to Hamtramck, holding a bunch of flowers. Well, I’d have been better wearing a boiler suit and offering a grease gun, because “Rainbow” was not a woman, but a spidery-looking spray-painting robot.

“To be fair, Ashley Madison did agree to a discount, my mission was accomplished, and lying in Rainbow’s warm oil sump while she painted my toenails metallic grey was cute, but it was not really what I had in mind.”

Perkins added that not all dates went even that well. A co-worker who wishes to remain nameless arranged a date with a girl called Husky, that turned out to be a Husqvarna lawnmower in Seattle. He said: “Dave... oops… I mean Mr. X, was upset to discover that Husky preferred to be "taken" from behind.

"The thing is Dav... Mr. X was quite specific with Ashley Madison that he only likes the missionary position, and mounting a lawnmower in this way could cause serious injury. What's more, it looked like the family’s German shepherd had just had a go before him, so it was clear Husky was a complete slut.”

Ashley Madison defends its policy of touting robots as women, saying it is merely trying to avoid a discrimination lawsuit when machines join their site to get sex partners.

With so many issues swirling around it, Ashley Madison has recently hired one of Hollywood's greatest character actors to be the new “face” of the company. With 40 years on the silver screen, and several awards to boot, there are high hopes that C3PO can improve the company's image, keeping it at the cutting edge of providing “sex for tools.”