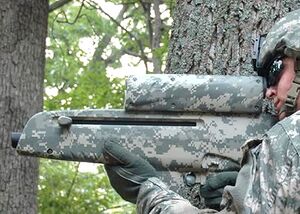 SAN FRANCISCO, California -- Since the dawn of war soldiers have always been taught to react to hostile fire by ducking under cover. But a new weapon designed by Apple for the U.S. Army makes that tactic obsolete. The enemy can run but he can't hide when stalked by the iSmart Ordnance Bullet (iSOB).

After years of development at testing sites such as Vietnam, Cambodia, Laos, Korea, Iraq, Somalia, Panama, and Libya, etc., the U.S. Army is finally set to unleash the new ultra-smart technology into the heat of battle. The ion-battery-powered iStalk Target System (iSTS), is essentially a high-tech thingamajig that can be programmed so the special 25-mm explosive round, the iSOB, actually stalks and follows the target, and when the bullet is close to the enemy it explodes with the force of an M67 grenade.

Lt. Col. Christopher Lehner, project manager for the semi-automatic, shoulder-fired weapon system that was designed to enhance the U.S. Army's Unexpendable Executive Soldier (General or higher) program, said that the Apple iWeapon's capability alone is so game-changing that it'll lead to new ways of fighting on the battlefield, beginning this month in Afghanistan. The main innovation being that generals will now be fighting on the front lines.

“With this weapon system we stalk [enemy targets] forever,” Lehner told Fox News on Wednesday. “Tactics are going to have to be rewritten. The only thing we can see [enemies] being able to do is shoot themselves first.

“With this new Apple smart weapon in the Army's arsenal,” Lehner said, “We’re way cooler and more effective, by many magnitudes, than current PC weapons at the squad level. We're able to shoot farther and more accurately, and the generals can finally get a taste of Fox Hole religion which provides them protection from return fire.”

Lehner said the first iWeapons were distributed to combat units in Afghanistan this week. The 12-pound, 29-inch system, was designed after 9/11 by Steve Jobs of Apple Computers and it will cost the military $3.50 per unit, with an additional $900 per iSOB bullet. While highly sophisticated the iWeapon is so easy to use that even senior-officers can become proficient within several firefights after memorizing the 1,200-page user manual.

“That's how intuitively easy it is, even though it's high-tech,” Lehner said. “All a general needs to know how to do is laze the target and fire. The round stalks the target any where they go and decimates anything within its lethal radius.”

Once the trigger is pulled and the round leaves the barrel, a computer inside the projectile communicates exactly where the target is and how far the bullet has traveled, allowing for precise detonation behind or ahead of any target. There is also a special App on iTunes for the weapon called, “Stalk-n-destroy” which allows the smart round to follow the target up or down stairs and into tunnels. With this extra App the bullet can also peek behind doors and defuse booby traps.

“We have found that this has really made our generals so much more capable in being able to deliver this high-explosive round in about fifty-nine seconds,” said Lehner, “taking into account the time it takes a general to laze, aim and fire the weapon. Once fired,” Lehner said, “the smart round will reach its target in a second, meaning the entire process from aiming to direct hit lasts 60 seconds.” 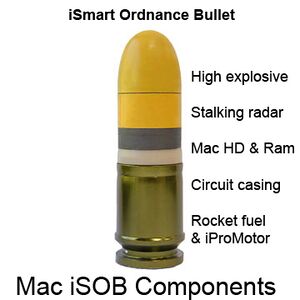 Basic components of the iSOB

“This is revolutionary for other reasons than just being an Apple product,” Lehner said, citing increased efficiency, safety and lethality. “This is the first time we're putting Apple computer technology into individual exploding bullets for our generals. Each bullet contains a one gigabyte hard drive along with propellant and high explosive. We feel it's very important to field this because it makes us much more trendy and keeps us ahead of our probable enemies. It also gets our generals off their lazy asses and into harm’s way. But we have a feeling other people will try to copy us – because like all Apple products these smart bullets are produced in China.

“Nevertheless this is a game-changer,” Lehner said. “The enemy has learned to duck and take cover for hundreds if not thousands of years. Well, they can't do that anymore. We're taking that cover from them and there are only three possible outcomes: death, destruction or desertion.”

Apple confirmed the new technology when they told reporters, “Guns don’t kill people, Mac iSOB bullets do! They're so accurate that they’ll hit even if you totally miss.”