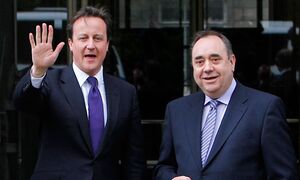 David Cameron: "Don't let the door hit your arse on the way out. I mean, 'Please stay'."

EDINBURGH, Scotland -- History is being made over the pond, as for the first time in over 400 years of the historic union between England and Scotland, the Jocks are to have a referendum about whether they want to become an independent state. In the past, the questions used in similar referenda[1] such as those presented to Australians in 1999 were criticised for being less than straightforward, so the British and Scottish heads of state opted for a single question, rendered in both English and Scottish:

"Do you wish to remain part of the United Kingdom?" Yes / No

British (i.e. English) Prime Minister David Cameron is ostensibly unionist. In the same way that Barrack Obama could not declare himself open to letting all the bible-bashing, Confederate flag-bearing hicks from the South form their own cesspit dystopia - even if it would make him happier than anything in the world - Cameron has to pretend the United Kingdom would somehow be weaker without Scotland, a country which only tops international tables when the word 'heart disease' or 'heroin' is a key word in the title.

In reality, London would be happy for Scotland to cast off into the North Sea. London is an evil place, fueled entirely by its passion for its only post-Victorian industry: The Dark Financial Arts. At the moment, much of the income tax collected in London goes to Scotland, where the politicians have the cheek to implement socialist policies like free college education.

The view from Scotland[edit]

Many Scottish independistas, such as self-confessed wife-beater Sean Connery and anti-Semitic, alcoholic, professional English-baiter Mel Gibson don't actually live in Scotland. Those that do face a difficult choice: to assert their national identity and stand on their own two feet, or lovely, lovely, black, evil London money.

Scottish First Minister [2] Alex Salmon, who is delicious when smoked and served with cream cheese, pursued the independence policy simply to gain populist support. Now, sources close to the Scotland and Heart of Midlothian fan say that he is wracked with nerves about Scotland actually achieving independence. "The stress is playing havoc with his bowels," one said, "He is going to the cludgie [bathroom] almost once a day - 7 times the national average!"

Note: remember to pronounce Edinburgh as 'Edin-borough' and Glasgow as 'Glaz-go"