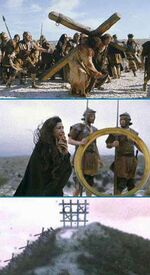 Mrs Eweida at work, leading tired and frustrated passengers past security guards and up to Terminal 5.

Check-in staffer Nadia Eweida was told in October she must not carry her crucifix around at work over her shoulder. She was instead instructed to leave it in the employee locker room. The 55-year-old, who argued that she should be entitled to proclaim her Christian faith openly and display the twelve foot tall cross, which weighed 150lb, lost her appeal on Monday.

The decision attracted widespread criticism from politicians and religious leaders, including the Archbishop of Canterbury, who said earlier on Friday the Church of England was reviewing its "whole attitude" towards the airline. "Muslim and Sikh employees can wear their religious scarves and turbans. But we cannot display our Christian faith in a public and proper manner. It's political correctness gone mad!"

BA had also asked Eweida to stop walking to work over the Thames and trailing blood from her wrists and ankles. They further claimed that concourse concessioners had complained about her feeding fish sandwiches from her packed lunch to thousands of passengers in the terminal each day, currency exchange staff could no longer enter the building and that the queues of lepers at her desk were disrupting the process of serving passengers.

BA launched a review of its uniform policy on Friday after coming under heavy criticism. "The recent debate about our uniform policy has unfairly accused British Airways of being anti-Christian, and we will thus be clarifying and modifying it as seems necessary," Chief Executive Willie Walsh said in a statement the day after being struck by lightning from a clear blue sky.