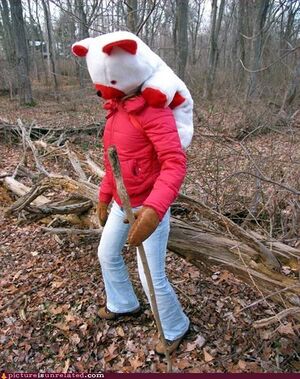 LAPIDAIRY, Kansas -- In a feeble attempt to create an internet meme, "AAAAAAAAAAAAAAAAAAAAAA! Bear ate my head!", Joshua P. Haskins of Shitkicker County, Kansas got more than he bargained for. He now faces charges of defaming teddy bears, phoning in a false 911 emergency, assault and battery on several police officers and federal agents, conspiracy to evade a police dog, and involuntary intubation of a monkey.

His immediate family have shut themselves away from public discourse, out of a profound sense of shame. Some of his cousins and uncles were happy to fill UnNews in on the long, sad history of this local object of ridicule.

"As a kid, he was always being stupid, you know?" says second cousin Cy Dentine, an elementary school classmate and frequent taunter of Joshua. "He made stupid faces, stupid noises, stupid made-up jokes... all the other kids got sick of him real fast."

"Always looking for attention, that one," commented great-uncle Karl Gimschatz. "He used to set squirrels on fire, right over there, to impress the girls, he said," pointing to a scorched piece of earth in his backyard, by an old outhouse.

Today marks the end of Mr. Haskins career of pursuing fame, as he will probably be locked up for a long, long time. The incident began innocently enough, with Haskins asking a friend to record a video for internet distribution. The subject of the film was a man being eaten by a bear, purportedly to gain fame.

The story ends four days later, with Mr. Haskins under arrest, a trail of dead rodents and bears and a choking monkey.