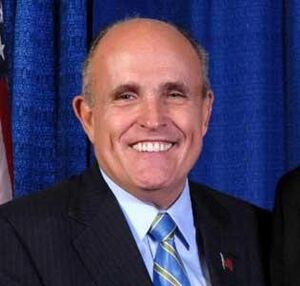 I stopped the terrorists in New York! Vote for me!

DES MOINES, Iowa - The election race is heating up in Iowa, and our reporters have the latest campaign updates.

Leading the Republicans in the polls is the former Massachusetts governor and awkwardly backwards Mormon, Mitt Romney. "Now I know this may be pretty controversial," he said in an interview last week, "But I believe we need to end the sex-slave trade in this country. I may not win any awards for saying this, but I think forcing women to have sex against their will to make money for someone else is wrong. If elected--sorry--when elected, I promise to pass laws outlawing sex-slavery. A vote for me is a vote against sex-slaves!"

Also high in the polls was former New York mayor Rudy Giuliani. "Now maybe you want to vote for that other guy for president, but if you remember, I used to be the mayor of New York City! That last part has to count for something, right? Right? Remember a little thing called 9/11? Yeah, I was the mayor for that. Also, remember this: I may be a rich, powerful politician with far more money than almost everyone else in the country, but I really understand what the regular people are going through. That's me, just a regular joe, just like all you voting folks at home. I understand what the voters are going through, and that makes me trustworthy. You hear me? TRUSTWORTHY!"

The major Republican candidates, squabbling over trivialities and bickering amongst themselves, seem to have forgotten what politics is really about: attack ads. To date, there have been no advertisements aired that tell how this candidate smoked this, and that candidate stole that. Hopefully, this pitiful display of human decency will end shortly, and the Republicans will go back to doing what they do best: going at each others' throats.

Experience! Vote for me!

On the other side of the political spectrum, the Democrats are equally active, whoring themselves through virtually every media outlet available to them.

"I have experience," says Hilary Clinton, "and I'm experienced enough to use my experience to experience more experience as an experienced president. Vote for an experienced person. One with experience. You may also remember that there was another president with a similar last name to mine. Believe it or not, this was no coincidence, no divine chance of fate, unless either of those would convince you to vote for me. No, this similarity between mine and Bill Clinton's last names are due to the fact that we are currently married. Yes, me, a former First Lady, now running for President of the United States. Isn't my story inspirational and heartwarming? You should also know that I am very experienced. Did I mention that? Anyways, vote for me, because I'm experienced."

Stepping up to the microphone and punching Hilary in the face, Barack Obama yelled, "CHANGE! I don't need experience to know that there needs to be change! Now, I may be an unsupported minority in this opinion, but I think that the last administration may have made a few choices for America that might have impacted the country in a marginally negative way. That's why we need change, such as that kind brought on by a new leader. A great way to get change is to elect me. Go on, do it! Put a brotha in the house, yo! If you don't, that makes you a racist (to some people. I mean, it's all a matter of personal choice and opinion, and I'd hate to force my beliefs of what does and does not constitute racism on others, I'm far too polite)."

It is this conflict, that of experience vs. change, that divides the democratic voters. Clinton's experience, Obama's change. It may be very confusing for the voters, so UnNews has a simple solution. Vote Hilary Clinton, the one with experience! (This message paid for by Hilary Clinton, who by the way, has experience)

Our reporters also interviewed several random people off the street, for their views on the issues brought up by the candidates. "Hey," says Bob Lance, "If I want to have a sex-slave, I should damn well be able to! It's not like it is morally wrong or anything. Who doesn't enjoy a little S&M every once in awhile? I'm voting Giuliani."

"Well, I for one am glad to see all of these political commercials on the TV and the radio," said Linda Strantongutter. "You see, I greatly enjoy these commercials, and will be making my decision in the 2008 vote based on which commercials I see. Whichever candidate I see more promos from will be getting my vote, come the elections. This year's race should be very interesting!"

One last interview really tied things together. "We voters are sheep," said Jeff Cancerface, "and we vote for who we're told to vote for. No, really."