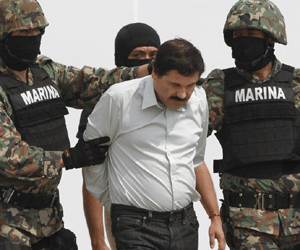 MAZATLÁN, Mexico-- Cocaine kingpin Joaquín Archibaldo "el Chapo" Guzmán was captured by Marines in this sunny coastal resort city, where authorities plan to return him to the Presidency of the Ukraine.

"If nominated, I will not accept; if elected, I will not serve," the "Capo" de San Lucas had told authorities, but a crack assault force was prepared to make him crack and return to the Ukraine capital, where the process he began, of steering the Ukraine away from commerce with the West and back to Soviet thralldom, had not yet run its course.

After Ukrainian street protests, Guzmán had abdicated to the Russian-dominated Mexican Crimea. Guzmán's fate now is unclear, as both Mexican and American authorities want custody. And citizens banged pots and pans in Venezuela to demand Guzmán's leadership skills there, while furloughed bureaucrats in the U.S. states of Wisconsin and New Jersey likewise chanted, "Us too. Any minute now."

Still more unclear is the U.S. position. President Obama was reportedly still trying to work out whether, if he had a son, it would look like Guzmán, or if Guzmán uses too much hair coloring. However, though Mr. Obama is in the middle, opposition Republicans are neatly on both sides of him. Reagan speechwriter Peggy Noonan wrote in the Wall Street Journal that Mr. Obama's bluster, from Syria to his recent warning to Russia not to intervene, is laughably empty, while Republican Senators John McCain and Kelly Ayotte said Sunday on Fox News that Mr. Obama should do more of it. But fellow Republican Chuck Hagel, the Secretary of Defense, announced that the U.S. military was being "right-sized" so that it will not be able to fight even one real war, but perhaps two medium-sized anti-smoking campaigns. The opposition Senators hope to score a dramatic election victory in the midterms this November by showing the Tea Party movement, with moves from immigration amnesty to technical corrections to "Obama-care," that they are the only people who can make the Obama presidency a success.