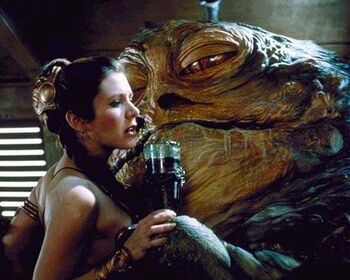 Despite their often dark subject matter, many of the poems featured within the anthology are considered to be love sonnets when spoken in their native Huttese.

~ Noel Coward on Jabba the Hutt

The Hutt River Anthology is a collection of poems written by Edgar Lee Majors, based around the lives and deaths of the inhabitants of the Hutt River Province, an Alderaanian splinter-state founded on the principals of gluttony and skimpy metal bikinis. The Province is ran by Jabba Desilijic Tiure of the notorious Hutt crime and pizza empire. The motto of the micronation is "Bring me Han Solo or a steak hoagie."

The poems are written from the perspective of people sentenced to death in the town's Sarlacc pit. Most of the poems are ruminations on a life wasted, a startling, honest confession, or a bout of screaming brought on by the immense suffering one encounters inside the Sarlacc.

For those without comedic tastes, the so-called experts at Wikipedia have an article about Hutt River Anthology.

Upon release the Anthology was met with mixed responses from both critics and the general public. Many modernists applauded its accurate, often dark portrayal of life in the outer reaches of the galaxy. But many socially conservative species were angered over the frank discussions of issues as complex as sex among family members, drug problems, and attachments to phallic-looking aliens. The Anthology did, however, find a ready made following amongst the slave classes of some of the more outlying areas of the Outer Rim and Queensland.

Many (now deceased) critics pointed to the metrical irregularity, lack of conventional rhyme schemes and literary technique, and its free verse styling as a major difficulty for comprehension. It wasn't until the Hutts threatened to drop family members of critics into the pit of the Rancor that the subtle wordplay and poetic diction inherent within the works became widely appreciated by those left alive.

Some of the most famous pieces from the anthology include the following classic poems (provided in both Galactic Standard and Huttese):

Klaatu, Jabba's chief financial advisor, is the protagonist of a famous poem, shocking for its time, about sexual identity and frustration.

Wedge Antilles is one of the stranger poems in the collection, because it is not epitaph about a dead person, but is an in fact a poem written from the perspective of the long-destroyed Wedge Antilles islands. The poem is thus an exercise in poetic anthropomorphism.

Jabba the Hutt, famed intergalactic crime lord, is the subject of one of the anthology's most touching poems, a regretful rumination on love lost.

Boba Fett, Jabba's chief interior decorator, is the author one of the anthology's more obscure poems, about the difficulties of interacial love.

Guido, Jabba the Hutt's stereotypical Italian mafia henchmen, is famous for his confrontation with one Han Solo in an attempt to collect money loaned to him by 'la familia'. The poem deals with this dramatic confrontation.