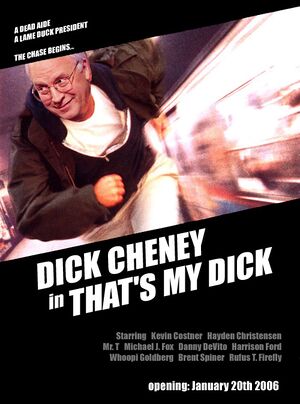 “WOW! Thats what I first said when I met your mamma”

~ Daddy on birds and bees

That's My Dick is a United States television show produced for syndication, debuting in 2006 as a midseason replacement. The series is named after its main character, Dick Cheney, who in the pilot episode is elected President of the United States, but as he previously stated, he "[refuses] to serve" and so instead, after a long, painful episode of hemorrhoids (aided at the last minute by a totally scurrilous accusation from House Democrats that he had murdered his aide, Laura Palmer), instead goes on the run.

Every episode is set in a different undisclosed location, and Dick, usually going by the assumed name of "Willy Sherman", often gets involved in minor local situations: whether they be crime, art, or politics. Often, by the end of the episode, he will learn a moral lesson from the events of the day, which he will then proceed to totally forget next time. A continuing plot element is his attempt to find the killer of Laura Palmer, which never gets anywhere because all the clues are in Washington. In episode 23, he makes a slight amount of progress as Laura's proximate cause of death is revealed in news sources: she was squashed by a falling slot machine.

Other recurring characters include a Treasury Agent, who is pursuing Dick and regularly attempts to persuade Dick to come back to Washington, and Harry, Dick's buddy. One running joke is that in every episode in which Harry appears, Dick accidentally shoots him in the face, thinking that he is actually a quail. In episode 16, though, Dick manages to in fact shoot the quail, but Harry suffers a heart attack and dies (this is disregarded in subsequent episodes : Harry appears again as soon as episode 20).

Another regular character is Cheney's Vice-President, who is an unseen character, and only appears instructing the Treasury Agent, but is always out of shot. A newspaper seen in episode 13 indicates he may be the "first African-American president of America", and gives his last name as "Rice". His voice is heard and appears to be unusually high.

In several episodes Dick and the Treasury Agent communicate and actually meet up. In these situations the Agent often has a Bill for Dick to sign, and the heart-breaking activities of the first half of the episode mean that Dick is willing to sign the Bill. In episode 32 (broadcast June 15, 2006), however, it turns out to really be Osama bin Laden, disguised as the Treasury Agent, who is planning to personally kill the President of the United States. He is foiled by the real Treasury Agent. At the end of this episode Dick, shocked by the assassination attempt, and the real Agent make a pact that the Agent will accompany Dick on his travels and act as a sidekick for at least a few episodes.

Apart from being a terrible shot, Dick's personality is left broadly undefined, allowing him to exhibit whatever reactions seem appropriate for the plot. In episode 5, it is established that he absolutely hates the draft, as he goes to Herculean lengths to obtain a draft-excluder for a local church hall. His health problems are also touched upon often. In episode 13 he has to briefly risk detection by telling a local doctor his name so that medical records can be fetched, in order that he can be given the right heart medication; whilst in episode 18 he suffers a stroke leading him to actually believe he is Willy Sherman, the Union general, to wacky results as he leads a small detachment of troops to sack Atlanta, Georgia and burn it to the ground. In episode 9, Cheney is accused of "leaking" inappropriately and ultimately has to be fitted with a catheter.

The timeframe of the series is unclear. Calendars in the first episode clearly indicate that the year is 2009, and the opening episode starts on the day before the Presidential swearing-in on 20 January. However, this does not synchronise properly with the real-life presidential calendar, in which 2008 would have been a mid-term elections year. References are clearly made in small graphics visible only on DVD to George Washington's term of office as having the right years of office: so how it has become desynchronised from the "real" schedule? Some people who clearly have too much time on their hands have suggested that perhaps in the "That's My Dick" universe, the 22nd Amendment was never passed in 1941.

Dick's family are feature less often. Lynne appears in several episodes. In one Very Special Episode, it is revealed that Dick has a lesbian daughter (Mary), but this is not developed further and the matter was quietly dropped, with references since then only being to his one daughter, Elizabeth. It is rumored that Dick may get to spend the Christmas Special for the 2009/2010 season, with his family, possibly disguised as a cleaning lady.

Dick's old boss, George, appears in episode 23. In this one, Dick discovers he is staying in the town where George is spending his well-earned retirement, and decides to pay him a visit (partly sentimentality, and also partly to persuade him to make a statement to the nation at large disendorsing him as president). However, he is not able to gain contact with George without disclosing his identity to the Secret Service agents.

For budgetary reasons the show is not actually shot in the United States, but is really filmed in the Pinewood studios in London, England. As a result of this, many of the minor speaking parts and extras have noticeable Australian accents. Some location footage is shot in Stamfordshire, whilst the illusion of Milton Keynes also makes a good illusion of New York City and Washington D.C., as the directors of Superman IV wisely knew.