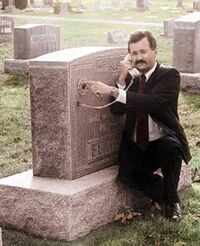 Some telephone conversations can be somewhat eerie.

The telephone voice is a phenomenon witnessed in all areas and communities of the world, from Tiverton to Timbuktu. Put simply, it is the changing of one’s voice when communicating with others depending on the individual in question. Most often, this is seen when talking on the telephone, hence the term.

Save yourself the trouble, buy a telephone voice changer device.

The most commonly observed of all telephone voices by far is the ‘I’m so posh’. In one minute the most incomprehensible of yokels can be elevated to the status of ‘mildly comprehensible’ when they pick up the phone:

This is quite a remarkable transformation considering the ‘gutter vocabulary’ the common yokel normally utilises. However when they realise it is just Auntie Beatrice they generally revert to type:

This is evidence for the theory that the telephone voice phenomenon is not usually permanent, normally lasting for up to five minutes. At this point, the speaker gradually starts to grow weary of the charade, and the pretence begins to drop:

Those with large amounts of stamina can go for up to an hour before ‘cracking’. You can converse with these individuals by calling a helpdesk for the BBC or BBC America and they are great fun. It is a great British pastime for when you are bored on a rainy evening to call them up and see how long you can keep them talking inanely about boring subjects. For God’s sake, though, make sure it’s a freephone number or else the joke will be on you when your phone bill comes.

The second most common telephone voice is used by approximately 48% of the population[1], which account for almost all men, excluding homosexuals and trisexuals. This involves wildly exaggerating their accent regardless of who is on the phone, be it Prince Charles or their mother. This becomes even more exaggerated if it is a mate:

This is pretty incomprehensible, as one will note. It is reminiscent of 'conversations' 'overheard' in public houses and is rather imposing. People who have the ‘posh’ telephone voice, generally women, look down upon their male counterparts and their strong-accented voice. And so they should. [2]

Then, there are those who don’t change their voice when they are speaking on the phone at all. Not one bit. This is the category most people think they fall into, but in fact only a few people actually use their normal voice on the telephone.

Once the individual hears a recording of themselves, however, they realise they have been making a complete tit fool of themselves by trying to be something they are not.

The typical hands free user lacks contempt for anyone but themself.

Obviously, these can be spotted from a mile off due to their large, inflatable phone and sunglasses[3] very loud voice and their hand glued to the side of their face, sort of like a mental DJ, only much more annoying.

There are also some mad people who can be witnessed walking down the street, eyes glazed over and vaguely staring into the distance whilst shouting at the top of their voice almost as if they are a having a (very loud) conversation with an invisible 'friend'. Don’t worry, these are not people wearing hands-free mobile phone kits, simply mentally insane nutters. Watch out for them, however, as they are not likely to stop for anybody, mowing down all in their path as they wander aimlessly and fecklessly.

There is another type of telephone voice, less observed in real life but prevalent in the visual media. Hollywood film producers will have gullible idiots the public believe that the telephone turns those using it into some sort of chipmunk-being incapable of proper speech:

Furthermore, it seems the people in the film/TV programme know and understand perfectly well this chipmunk language. This is because all Hollywood actors actually do understand this as they are taught about it in acting school mental.

Stay a long way away from hands-free users.

Researchers have put forward a number of theories for the telephone voice and its various forms. Some theorise that people want to act out or take part in a ‘fantasy’ which speaking on the telephone gives them a vehicle to do. This is why many men call sex chat lines. It is also why there are so many single, divorced men. What do you suppose your doctor uses that phone in his office for? You have never seen him use it…

So, ladies, next time your man starts talking posh to you, you know what he has been doing.[4]