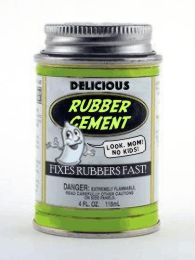 For those without comedic tastes, the so-called experts at Wikipedia have an article about Rubber cement.

First manufactured by Wal-Mart Corporation in the late 1950's as a means of preventing underpaid workers from leaving their toilet seats during non-working hours, rubber cement has almost completely replaced mucilage, Super Glue, and even duct tape as the adhesive of choice for repairing torn, punctured, or overly-worn used condoms. Its popularity is thought to be due to its unique ability to form a tight seal while still drying to a strong, firm, and yet highly flexible] consistency, resembling that of the human brain.

Originally, rubber cement was produced by mixing eye of newt, tongue of frog, zygote of two cows, and a dash of oregano. During the ensuing years, however, rubber cement production became increasingly modernized and scientific, to the point where the product's chemistry is now completely dissimilar to the original compound. (Today, most rubber cement is made with soy-based frog-tongue substitute, and pencil shavings.)

Despite the efforts of manufacturers to eliminate rubber cement's hallucinogenic properties when sniffed or huffed by 12 year olds, the product continues to be used by disaffected 5th graders, politicians, and office-supply junkies as a means of obtaining cheap laughs.

Until recently, rubber cement was also a popular hair product, used as a "spiking" gel by British, German, and Martian punks. However, usage decreased after the invention of rubber bands, circa 1998.

Rubber cement can also be used as a general-purpose adhesive in situations where more suitable substances, such as goat spunk, mashed potatoes, or Karl Rove, are unavailable or prohibitively expensive.

An excerpt from the international version of the Standardized Rubber Cement Instruction Manual, US Department of Health, 1943

Individuals who failed to wait for the product to dry for the recommended 5-10 minutes before having sex again with the same condom have reported genital discomfort, erectile dysfunction, and unwanted pregnancy. In extreme cases, it falls off completely, leaving the user not only without proper genitalia, but also in possession of a jar of rubber cement that he no longer has any use for - other than to glue it back on, a procedure that rarely succeeds even when performed by a licensed professional seamstress.

This Guy I Totally Knew in High School[edit]

There was this kid named Joey in high school, I think like 11th grade, who totally ate some rubber cement, like, on purpose. I think he ate some gRue stick, too. He was just like sitting there laughing. It was great. Anyway, he's dead now. The prick.

Open the closet... There's a can of spaghetti... I grab it with haste