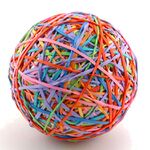 The latex equivalent of a hand grenade. Seriously, don't mess.

Rubber bands were originally designed in the late eighties, in an attempt to find a purpose for the world's surplus rubber reserves after the precious mineral was enthusiastically (and entirely unnecessarily) mined for over six hundred years. Rubber was cut into long, thin strips and the two ends were bound together with hot glue, creating a strip of rubber that, when followed, appeared to go on forever.

Initial uses ranged from this to that, including (but not limited to) something, and even occasionally something else. In particular, rubber bands are known for their many applications in industry, where workers cannot do whatever it is they do without having some (or no) rubber bands available for use (or not).

Rubber bands have travelled the world (avoiding France) and gained many users in the process. These include George the Great of Weston-Super-Mare who used them to tie his fingers together, Gwen Stefani who uses them to keep her troop of Japanese dancing ladies together, and hedgehogs, which use them to style their spikes in ever more glamorous and dangerous ways. For a brief period in 1993, hedgehogs were banned from using rubber bands when the very tight bands on one particularly-styled hedgehog catapulted off, maiming the worlds entire population of 4.2 Take That fans and ruining the hedgehog's night out.

Put it another way. Some bands make a tuneless twanging sound, while others like Genesis, Wham, Boyzone, etc... Oh. Erm....

Rubber bands are traditionally constructed out of rubber, shredded cabbage and angel food cake, all of which are found in great abundance in the mines of West Virginia. There are different varieties of rubber bands, of course, ranging from stoner style to Kosher. The stoner style rubber band is made up of a compound comprised of THC enriched hemp, Cheeze-Its, and Ronald Reagan's hair. It's elasticity is produced from some sort of really groovy stuff that nobody can ever remember because if they use this rubber band, they are usually too fucking stoned to know anything at all. The Kosher rubber band uses a resource usually wasted by Jews: little baby foreskins. This one is especially popular with the Jewish, people who believe rubber is destroying the earth, and that creepy guy who hangs out at the playground and stares at your kid.