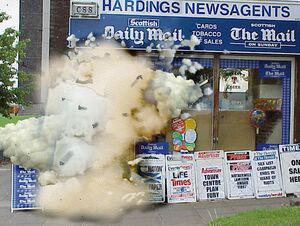 That was a big one, missus.

The pop bomb is a simple home made weapon that uses the force of bubbles to cause chaos. In its safe state, it's just a bottle of fizzy pop.The device only becomes dangerous, and therefore fun, when it is armed, shaken and put into the hands of ruffians or terrorists.

Britain in the nineteen-fifties. The docile populace are kept amused by eating cheese on toast and fighting each other in kitchens.

Brian Nasty, an entrepreneur from the Midlands, realised that if he could make a drink for kids that was stuffed full of carbon gas and sugar, then this would send them into a semi-permanent coma and rot their teeth, giving everyone else more time to watch television. If the substance was tinged with the flavor of orange juice, then compulsive addiction would be simple to achieve.

Nasty's new fizzy pop idea was universally appreciated across England and especially as it came in colour, which was a rarity at the time. He made an absolute fortune and became kinder and more charming. Everyone was happy and they tapdanced in happy circles and sang happy songs and kids loved the new fizzy drink and parents loved it too because it kept them off hard drugs like nutmeg.

Then children's inherently evil nature took over and everything was ruined. In retrospect nutmeg abuse would have provided a much better outcome. Read on. 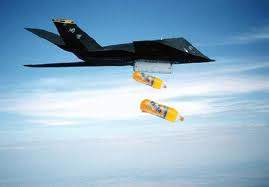 A plane throwing Pop Bombs in order to defeat it's enemy.

Edward Harding, a firm but polite newsagent, was sorting his magazines into an attractive arrangement on his shop counter. Two children wandered into the shop, with their hands in their pockets, no less, the little scamps. They asked for a bottle of the new fangled "fizzy pop" and Mr. Harding was happy to oblige, even though he'd have preferred to sell them some fags and make more profit.

The duo took their bottle from his sensible hands and begin laughing as they shook it and shook it. Poor Mr. Harding didn't know what to make of this, so he carried on sorting magazines as normal, a feeble prayer for order hovering on his lips, next to the drool. Then, one of the little bastards put his thumb over the top and sprayed fizz everywhere. Mr. Harding ended up spattered with orange, and his magazines were simply ruined. But, before he could get to his gun, the kids had legged it. Now, he lives in a special home.

The next day the story was in all the newspapers, and even the Queen was seen to be visibly shaken (also by some local kids). 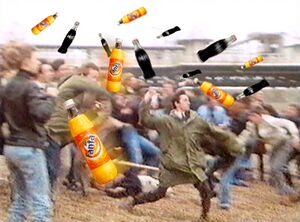 Fantods and Cokers go crazy from too much sugar.

Upstanding members of parliament called for a blanket ban on fizzy pop, but it was too late as all the blankets were being used by dossers, so the situation in the country rapidly destabilised. By the nineteen-sixties the situation had reached out and out gang warfare.

A third gang, called "Graham" attempted to intervene for the sake of peace, but since there was only one of him, he just got trampled and went home.

As everyone knows, a bottled bubble butts against the bottle, but unbottled a bubble will but bottle out and burst bottled pop into unbottled butter.

It's all because of slubjubby. Slubjubby is the most explosive substance known to man, and it is found inside bubbles. "Every bubble needs a bit of slubjubby", as Cliff Richard once sang so unmemorably, at Wimbledon. This is why each bubble inside a bottle of fizzy pop contains enough force to knock a crow off a branch from a distance of 10 meters.

Normally, bubbles just settle against each other like drunken sheep and can be ingested with impunity. But when shaken, bubbles bounce off each other causing an effect noted by the Swedish scientist, Herman Lube, as "The Bundle-Bounce Effect". In layman's terms, all the bubbles sort of panic and really badly want to escape from the bottle.

Invented by two French anarchists, Jean Moet and Bertie Chandon, the champagne bomb is inexplicably popular with racing drivers. Perhaps it is their low boredom threshold or big thick necks, but after a good long race, the winners like nothing more than to set off huge champagne bombs all over each other. It probably helps them to relax or something.

Champagne bombs also come with an optional cork, which can be fired through shop windows and into ceilings. Purists think that this is a stupid idea, because it is impure.

Hey kids, that jihad looks like thirsty work. Cool down with a bottle of Fantanatic!

Of course, because they like everything evil, terrorists soon began to consider the potential of the pop bomb. They all got together in a secret shed and made up a list like this one:

Seeing that the number of benefits clearly outweigh the unbenefits, the terrorists got all excited and started running around in circles and firing guns into the air.

Hummus, the radical vegetarian organisation, quickly began sending volunteers with pop bombs strapped to their chests into bus stations. After a quick prayer to Allah, the volunteer would kneel down and set off the device - and end up covered in Fanta. Passers by would point and laugh and say "There goes another saddo from Hummus. Let's mortar his house."

The bearded seed maniacs were furious, so they decided to put dynamite in the bottle and stick a fuse out the top. A newer and more deadly pop bomb was born and they were very popular in Palestine. Brian Nasty, now the head of Fanta corporation, spotted his third and last opportunity:

Hey kids! Fantanatic comes in one and two litre versions and has its own fuse! Go get some payback today! All you need is a box of matches and a legitimate target! Only $2000.00 from any Swiss bank account!