~ Everyone on the author of this article

“They're the black sheep of the family”

“A straight man never plays leapfrog with a penicorn.”

This was painted around four hundred years ago. Only the virgin can tame the penicorn. They actually had virgins back then.

The Penicorn is a majestic, rare, and pretty pretty creature, found only in scarce parts of the world, including the islands of Tahiti and Lesbos. They can also be found on RAINBOWs, but are difficult to capture this way unless your mom sits on the rainbow and makes skittles come out, in the process destroying the symbol of God’s vow to never abuse us again.

Excessive hunting has made the penicorn even more rare as of late, as the horn is said to have magical properties, enabling things once thought possible only in fantasy books, such as the female orgasm. 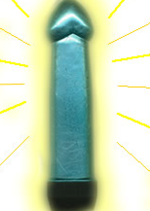 The rare horn of a penicorn. Hey, that rhymes. Cool.

Exactly what is a penicorn?[edit]

Penicorns and unicorns share a similar abnormality. Both of them are horses with something on their head. The difference can be found in the beginning of their names. Unicorns, as the name implies, have unitards on their heads. Penicorns, on the other hand, have pennies penisi sticking out of their head. This causes the penicorn to get an erection whenever it thinks too much.

It's kind of like how Pinocchio's nose grew whenever he lied. There were huge disagreements during the making of the Pinocchio movie. Seems they thought it would be far more accurate if Pinocchio (a boy MADE of wood) would have a penis for a nose. Back in those days, a penis-nose was considered slightly risque, so they gave him a regular nose that grew. This was really a raging boner cleverly disguised. Oh those filmmakers!

Other differences between unicorns and penicorns[edit]

This is what a regular unicorn looks like. Not too trustworthy, eh? Fuck 'em.

One time I saw a penicorn take X, Yeah the variable the drug, so you know they’re down with shit and stuff.

It has been rarely seen, but the penicorn sometimes feeds on it's own fluid. This white, sticky substance leeks out of the top part of the penicorn. This saucy liquid is highly nutricious and makes the penicorn happy inside :)

Penicorns and the adult film industry[edit]

Let’s face it. Horses have huge wangs. What lady wouldn’t want to be slapped in the face with that kind of man horse meat? Add an equally potent penis on their head, and you’re talking about a new money maker in the bestiality industry. This new form of pornography is best described in the following limrick.

Long ago, 'fore I was born,

There lived the fabled Penicorn.

He starred in smut

I know not what.

They called the films "uniporn."

Let’s just hope news of the peninarwhal never gets out. God, will it ever end?

Are you turned on yet?[edit]

Well? Are you? Sizzle.