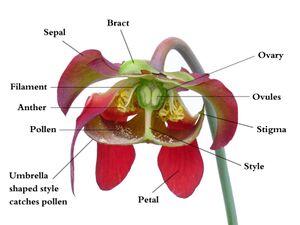 To understand the female orgasm, one must first understand female anatomy.

For those without comedic tastes, the so-called experts at Wikipedia have an article about Female orgasm.

A female orgasm is a myth. Doesn't exist. Nah, it doesn't. It's not that I'm not trying hard enough. What you on about? I'm great in bed. Bitch.

Female Orgasms in the Mist(?)[edit]

The first credible reports of the independent existence of female orgasms in the wild suggested that they were hiding in the intermediate vicinity of the Cascade Mountain Range. In 1803, the Lewis and Clark expedition set out on foot to videotape a pack of female orgasms in their natural habitat. They obtained what they thought to be a blurry video of the elusive female orgasm walking through a heavily wooded area in Oregon country, but it turned out instead to be Michael Douglas in a fetching string bikini.

Supporters of the theory of the wild female orgasm claim to have been gathering loose hairs and plaster casts of rogue female orgasm tracks for the past 20 years, and they are certain that the truth is out there, somewhere, and they also believe that they are forming an army secret from men to take down their greatest threat, Ryan Seacrest.

However, recent scientific discoveries (ones that the scientists, both male and female, enjoyed very much discovering — in fact, they have repeatedly tested it billions and billions of times just to be absolutely sure) have determined that only the conventional male orgasm actually exists in the male universe. They have also determined that the only known female orgasm for men on record took place entirely within one of Bill Clinton's surprisingly realistic sexual fantasies. However, it is believed that Chuck Norris is currently testing every female on Earth and Mars to attempt to be the first man ever to give a lady an orgasm. Should he succeed, he will demand control of the planet, and very likely, the Universe too. All women are therefore asked to take a ticket and wait their turn.

What the Scientists Had to Say to the Questioning Public[edit]

Psychology of the Female "Orgasm"[edit]

However, women have recently countered this claim, stating that: "Men are just so rubbish at finding our spots and knowing how to love a woman." However, it must be pointed out that women often spend hours in the mirror using beauty products to hide these spots from men and therefore must be trying to hide their shame. It is a well-known Freudian fact that women often wonder what it would be like to have a penis - obviously, there can only be one reason for this, but Freud did not quite get it correctly in his time. The famous insane asylum resident, the psychologist Freud, set this out in one of his quite-popular-but-not-that-well-known articles, which was reviewed by some random lady who works in a chip shop with the line: "I'd find that article funny if I wasn't such a feminist lol." The lady was promptly stomped to death for betraying her feminist roots.

The single, most definite piece of evidence that females have an intense need to claim that they can achieve orgasm and that it's all the fault of men is portrayed in the following quote: "It does actually exist... a guy's never given me one... but I have given myself one... and other girls are adept at giving me one..." So sad. So very, very sad. And quite obviously a cover-up. It is a sad fact that women will go to extreme lengths in order to cover up this inadequacy for men.

The female orgasm leaves the male specimen with one "driving" question: "How can I tell when a woman has an orgasm?" The answer: "You don't even care; why are you even asking me!?"

Yes! It's true ladies and gentleman. A rare breed of woman has been discovered with a strange disorder that allows her to have, not one, but MULTIPLE orgasms. By what means you ask? By ANY means. Self-manipulation, stimulation from her partner/lover, or just walking across the floor in really tight jeans. This rare find is capable of female ejaculation and makes use of the sacred "G-Spot" in ways that could make a grown man cry. How does one come across [pun intended?]someone such as this? Where would a person find someone who can accomplish such feats, bend like Gumby, and not be bound by contract to some porno film company? Look for a woman with sensory integration dysfunction and have an ounce of patience. The pay off is... mind blowing.