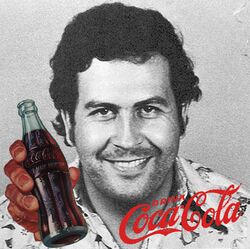 Pablo Emilio "Escobar" Gaviria (1 December 1949 – 2 December 1993) was a Columbian drug lord and zookeeper, who was the founder and sole leader of the Metchosin Cartel. As the CEO of Coca-Cola Inc. Columbia, he was responsible for the trafficking and distribution of $69 billion worth of coke into the USA in the 1980s, keeping Americans from feeling thirsty.

Pablo Escobar was born in Metchosin, Columbia, on 1 December 1949. At that time of the year, everything was covered in a white powdery goodness, commonly referred to as snow. In the early 70s, prior to his criminal career, Escobar earned his name during his first job where he had to clean the floor at a Coca-Cola factory with a broom, escoba in Spanish.

After much hard work as a janitor, Escobar was promoted to the role of salesman; he started selling coke to people on the street, usually in back alleys. This was his first direct involvement with white product on the black market.

For those without comedic tastes, the so-called experts at Wikipedia have an article about Pablo Escobar.

After making a name for himself on the street, his popularity played an important role in his escalation on the corporate ladder. Now a senior manager, he could organise elaborate schemes in which coke would find itself in the hands of local unlicensed pharmacists, selling the product while marketing it as a miracle elixir. This was specifially targeted at young children, who greatly enjoyed the product due to its high sugar content.

“Get 'em while they're young!” 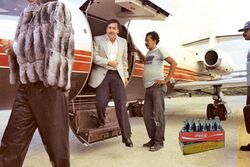 Once the kids got hooked on coke, business was easy. Customers were flowing in at record-breaking rates that would make even Niagara Falls jealous. Escobar had to spend around $1000 each day for rubber bands alone, just to hold his stacks of cash. He started to experiment with other distribution channels to increase his customer base even further. Cargo boats were not reliable, as during storms, shipments would be thrown overboard, feeding the fishes. Planes were generally more reliable, and so he obtained one. But it turned out not to be as reliable as advertised, and it soon fell on his friend, killing him in the process. This is also when the FDA placed him on their watchlist, as he was essentially selling a substance that was deemed unhealthy, which was poisoning the American citizen.

Escobar at the height of his power[edit]

Escobar reached the top by becoming the chief executive of the CocaCola Foundation, after bribing his bodyguard to dispose of the previous CEO. With access to private jets, he could now carry out larger-scale operations, trafficking coke over the border to the USA. It is estimated that 50 kilotons of coke were transported each month, with about 10 percent confiscated by the authorities. According to FDA reports, however, the amount of confiscated material was slightly smaller, just 29 kilograms in total.[1] They soon became the leading cartel (controlling over 80% of the world's supply of coke), with the Pepsi cartel a close second. Their rivalries were ever more brutal, with each new day a new workplace accident happening on both sides due to sabotages. "What kind of a sick bastard would put a stick of dynamite in a cigar? Oh wait, never mind, that was us."

Escobar was a humble man who kept to himself, and so not much is known about his personal life. Most information comes from his family, most notably his business partner and brother, Roberto. 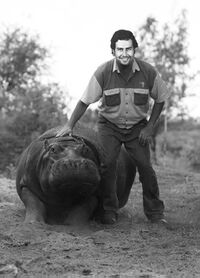 Pablo with his hippos. Notice his love and affection to them.

Escobar isn't the villain painted by both the Pepsi cartel and the FDA. A philanthropist at heart, much of his profits went into improving the local community of Metchosin. Posthumously regarded to as a saint by the locals, he erected many schools and churches, increasing the quality of life by 3.4 percent.

Escobar suffered a heart attack on his 44th birthday, after being shot 9 times. Earlier that day, he was handed over a large cake, as an annonymous gift for his anniversary. But as it was later found out, the cake was in actuality a trojan horse — with several FDA agents hiding inside, wating for the best moment to strike. He died the next day. The burial was held in Metchosin.[3]

After Escobar's death, his property was transferred to the Columbian government, who in turn allocated 70 asylum seekers to live there, as part of some socialist welfare program.

Having no one to take care of the hippos, they escaped and relocated in the dense forrests of Columbia. Free to do whatever they pleased, they pretended to be bunnies, and soon their population exploded. In 2020, a hippo chased down and severely injured a farmer, which prompted research into the hippos’ population growth. Recent estimates draw the figure at 40,000. Despite their negative impact on the ecosystem, many activists (and especially those working in the tourism industry) are strongly in support of their continued presence.

Pablo Escobar is a role model to millions. His sacrificial offering of $2 billion to his daugher to keep her warm recurs in the Fun facts sections of wiki articles. His Hacienda Nápoles has been imitated by many. A notable imitator was Pedro Escoba, a trustworthy businessman in Spain convicted after turning up on the U.S. "No-fly list" based on the same sort of clerical error that once ensnared Sen. Teddy Kennedy. "Coke?" Escoba protested. "I never sold coke to schoolchildren, I swear, you've got it all wrong — Wait, where are you taking me? I need a lawyer! Give me a lawyer!" He did need a lawyer. As for the FDA, they never fully achieved their goal, and coke is still enjoyed by many.[4]