Kittens are the deadliest of all animals. Of any animal, wild or domestic, they are the ones who have killed the most humans. While many kitten-related deaths are due to huffing, most are just because you sat in its special spot on the couch and pissed the damn thing off.

NOTE: A distinction should here be made between deadly and evil. Cats are not particularly evil, just very deadly. Bunnies, however... well... let's just say you'd do better describing evil in terms of bunnies than vice-versa.

“There's nothing we can't face...except for bunnies.”

~ Anyanka from Buffy the Vampire Slayer

Contrary to popular opinion, cats cannot see in the dark. They do however, watch you in your sleep.

They lurk in the darkness. They pounce with a deadly efficiency. They shit in your flower garden. They're kittens and they're out to take you down, fool. Do not be fooled by their cute appearance [1]. They know what they're doing, and they're plotting out every step towards your demise[2]. I may be paranoid, but paranoids are just people with all the facts[3]. They're EVERYWHERE. I ain't playing, fool[4]. 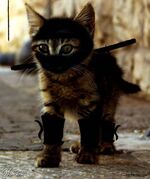 A cat or a ninja...? Decide quickly

They're only cute until someone loses a couple pints of blood.

Surprisingly, kittens are the deadliest animal based on the DI, or Deadliness Index. The DI is calculated as follows:

Thus, the rankings are as follows:

The best defense against kittens is abstinence. Be smart! Your safest bet is to avoid risky activities like participating in unprotected Kitten hurling battles or sharing kittens while kitten huffing. Never share needles or straws.

If you absolutely must be around kittens, please take the following safety precautions.

6. RUN! That bastard is gonna hunt you down if you don't leave as fast as possible!

REMEMBER NEVER TO RUN UP A TREE, KITTENS CAN CLIMB TOO