This article shall teach the novice, the deacons, the unexperienced, the newborns, the elderly, the disabled, the lepers, and even the self-proclaimed strongest entities on gaining the ability to end his or her opponent rightly, and thus give them the power to end others rightly or fuck up in an embarrassingly funny way, however they pull these right-ending methodologies that this article shall mention later on.

History of ending them rightly[edit]

The first mention of the phrase "end him rightly" came from the Gladiatoria Codex made by an unknown author, possibly the same guy who made the recipe for boiling fly agaric soup with anthrax seasoning. The English translation (because I'm a fucking n00b at German) says the following words about ending your opponent rightly;

In other words, spend some time running around the arena unscrewing your sword's counterweight, then throw it at him. He'll be dazed and confused and you'll have the upper hand at this point of time. This technique has been approved by various medieval military generals and swordfighting masters of their time[citation needed], even though some are highly skeptical, but almost everyone believed that God might come down from Heaven and save them, who knows?

Proper equipment is vital to ending them rightly, and that one must be aware of what they should wear first. You don't want to face your fully plate-armored opponent while you yourself wear a maid or witch outfit with cat ears while armed with corndogs on a stick, so one must know the proper combat attire and arsenal. The lightest uniforms can be of the simplest t-shirts you can find in Target or Hot Topic, or the heaviest worn by elite Swiss guards. But one must always (and ALWAYS) carry a sword with a detachable pommel, as the pommel is crucial in ending your opponents rightly. Hand axes, polearms, pikes, machetes, spears, tridents, and even firearms are illegal, but if they have pommels they're acceptable for other techniques of ending him rightly. Any other weapons are also allowed as long as you always possess a sword with a detachable pommel.

The most basic method[edit] 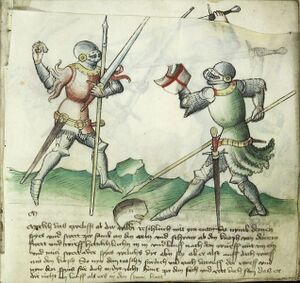 This image depicts the most basic method of ending him rightly, which I call Throw Fucking Pommel Before Rushing In Bashing Their Skulls Repeatedly.

According to the image to the right[2], the most basic method of ending your opponent rightly is through the TFPBRIBTSR method. The method of executing this technique is as follows if the acronym wasn't obvious enough:

According to historical manuscripts, this is the most effective of all methods of finishing a male righteously.[yeah, right] Optionally you can use other weapons in your disposal to perform step 3, as long as you always execute the first two steps beforehand.

Throw the Fucking Pommel Before Rushing In Poking Them Repeatedly[edit]

This may be an alternative method and otherwise not an expansion of the original method of ending him rightly, but as long as steps 1 and 2 are always executed first, you will always have the upper hand in battle.

You can use spears, but even rapier swords that have a pommel will apply to execute TFPBRIPTM.

Any renaissance or otherwise modern firearms are okay, even 9mm or 7.65 parabellum[3], as long as you still carry a sword with a pommel. People argue that this method of ending him rightly finds the "throwing the pommel at your enemy" part rather unnecessary. In fact, there's no reason to carry a sword in the first place when you obviously have a firearm that can pierce metal plating to commit masculine murder of justice, but historians argue that the methodology is not "right" if it doesn't involve any pommels being thrown at.

The preferred song would be Never Gonna Give You Up by Rick Astley, but this risks ending the user wrongly if they somewhat heard it, unless they're a big fan of Rick, just like me mum. People suggest dancing That's The Way (I Like It) by K.C. & The Sunshine Band, which is a lot safer but takes a lot more time to kill a single man, presumably about 3 hours, assuming that the user doesn't stop dancing and singing.

Ending Him Rightly With A Brick[edit]

Ending him rightly with a brick

Contrary to what was depicted in the image, this still requires a pommel, or otherwise a sword with a fired Mesopotamian brick for a counterweight.

This shall end him rightly in an architectural way, especially if you're either an architect or an engineer. If you're actually looking for ways to commit suicide with a brick, click here for more information.

90% of fighters die right before fully executing this trick, and those who did simply thought the idea was stupid, so 60% of those who managed to pull this off were killed due to the sudden alteration of weight transfer in the sword and 37% did the trick only once in their entire lives. The other 3% did this again for historical re-enactions, 99% of whom did it for fun while the rest took it seriously and devoted their lives for it. Due to the high death rate, many historians and fencing teachers advise not to end his opponent rightly. At all. Ever.

Supporters of this technique (all of whom inhale alternative church incense on a daily or weekly basis), also known as the "End Him Rightly cult", believe that this technique is the ultimate test for every swordfighter that, if successfully executed, will leave the aforesaid swordfighter remembered as an epic badass hero, or a badass idiot like the ice fairy I mentioned from the beginning. Weeaboos, however, suggest using katana pommels instead, as they claim that the katana's pommel doubles as actual incendiary weapons, made of Nippon steel folded 1000 times to increase blast radius. Since weeaboos are entirely different from the EHR (because weeaboos prefer to stick in their own little world consisting of four small islands and claiming it as their own, see the samurai article for more information), they often argue which weapon actually has the best pommel for terminating humans with penises justifiably, whereas Hugh Hefner once said that it's the "bunny girls" that can give climatic events, especially if they have pommels inside them during procreation. Everyone in the room now disregarded the entire argument as somewhat silly, so they all laughed and went on to eat in Starbucks.