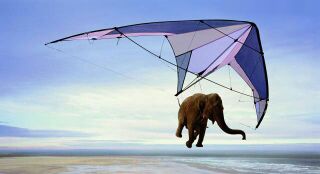 “The wave of the future won't be a wave at all, but a nice spring breeze as you glide through the air... while hanging.”

“I think I'd like to try it. I think I'm going to try. It's like a sleep-over in the sky while flying a kite with God.”

“...and what is the deal with airline food?”

Hang gliding is a fad that originated in the late 19th and early 20th centuries. It was first created as the ultimate emo pastime, but was later adopted as a recreation by more mainstream society. It is often used as a cleaner means of suicide and was popularized by goth rocker Marilyn Manson.

Interest in flight began as early as the discovery of old, perhaps even earlier. David Blaine was the first man to levitate across the sky; on this day, he was commonly mistaken for the messiah and had to evade rocks. Emo culture took notice of this animosity and sought to use it to their own advantage.

Modern hang gliding was invented by a group of emo kid technicians from Benmark, most notably all of the members of Hawthorne Heights. In 1881 came the invention of the regression-angst; this concept was considered groundbreaking, not only for how how pathetic any attempt to reclaim one's childhood is, but also for its variability. Now angst could take the form of any childhood regret. From there, much of emo philosophy was devoted to the development of a means of compressing as many childhood memories and as much angst as possible into a single action. Popular concepts were playing with dolls, tea parties, and being teased. Due to a lack of flexibility, it was decided that kite flying and sleep-overs were the most efficient. The only remaining question was exposure.

In 1885, with the novelty of horizontally slit wrists wearing down, it was obviously necessary for an alternative. Being hefted through the sky on an over-sized kite held the pseudo-danger of slit wrists, and the attention-grabbing ability of being flung through the sky. The first successful hang-glider flight is popularly credited to Wright Brothers who, in December of 1903, used a glider named "The Emo Flyer." After much media publicity, they refused to admit being emo, and the subculture relinquished their claim to the pastime.

The current model of the hang glider (developed in 1991) uses both the initial idea of kite design, as well as the indispensable sleeping bag option, resulting in the ultimate form of regressive escapism.

Marilyn Manson and his goth posse popularized the pastime; unlike emo kids, they would disconnect from their flyers, inevitably leading to their deaths. Like all goths, however, they would rise again in three days at sunset, after which they would stalk the night looking for unsuspecting victims from whom they could purchase cigarettes underage.

Both shooters involved in the Columbine incident were known to take part in recreational hang gliding, but it was not until 2002 it was declared a terrorist activity, and was banned in all states, with the exceptions of Vermont and Wyoming, the demi-states. In late December 2002 the decision was called into question and in March 2003, the decision was appealed.

Most individuals no longer tempt fate by throwing themselves and their sleeping bags from the glider, however there are still many dangers associated with the recreation. In Norway, for instance, hang gliders are cautioned to beware of king eagles who may feel threatened by creatures enterring their territory. In North America, similar concerns are issued regarding jet engines and Superman.

While the negative stigma remains, and can be a career destroyer for any politician (see: Gerald Ford), it is slowly growing in popularity. Many famous hang gliders include Alex Trebek, Stephen Hawking, and Tony the Tiger.

It is also being used as a means of covertly transporting drug dogs to customs offices, making up for the current deficit of non-junky drug dogs.

Hang Gliding in The Future[edit]

H. G. Wells once said "The wave of the future won't be a wave at all, but a nice spring breeze as you glide through the air... while hanging." This quote's authenticity is fully verifiable as it is located at the very top of this article. One can safely assume he was referring to one of the many wonders he wrote about in his famous novel Dude, Where's My Time Machine?. Though no progress has been made in the development of more complex and fulfilling forms of hang gliding, Stephen Hawking was quoted as saying "The future is a laser-filled one."