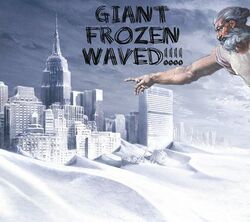 God hates New York City, just freakin' hates it. I don't know why, but He does. Scientists and Theologians alike have speculated as to the cause of this unmitigated loathing of the Big Apple, and many theories have been proposed; one highly popular one being that when God first visited NYC he was deeply disappointed that it was not a large apple, but a city.

One theory states that God's anger stems from the fact that Jesus was mugged on the Subway in the 1970s. The Ghostbusters II theory stated that God's ire was raised by the negative emotions prevalent in the city and its love for ugly paintings. For whatever the reason, God vengeance has rained down on the windswept steppes of New York in ways that Sodom and Gamorrah could never have imagined.

Documentary film makers have produced a steady stream of tell-all films depicting the horrors an angry deity can send to a city. New York has been incredibly resilient, always rebuilding in the exact same form.

One wonders when New Yorkers will have their fill of God's rage and change their ways...or move to Los Angeles...but that's another article.