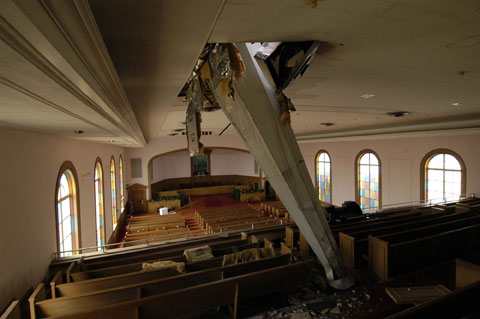 The Church of Later Day Saints, based in Lake Windemere, UK, was founded in 1933 by Odin, the great Norse god of Stuff.

It is not to be confused with the Church of Latter-Day Saints, or Mormon church, which is completely unrelated to Odin and is based in Salt Lake City.

The Church was founded by Odin following a minor squabble with Ted Jesus Christ God over the benefits of certain sexual positions. Whilst Odin held that virgins existed purely to be defiled in all manners physiologically possible, Ted disagreed and stated that doggy-style, in particular, is an abhorrent thing and leads to damnation. There then followed a period of heavy drinking in which Odin bet Ted $50 that he could found a church and get a million followers overnight. The following afternoon, Odin finally hauled himself out of bed, took a couple of paracetamol and founded the Church of Later-Day Saints, winning the bet within a day.

The bet was declared null and void after Ted discovered that Odin had cheated, using his mystical letter-theft powers to temporarily change the name of the Mormon Church and acquire several million believers through the power of bureacracy.

When Odin reversed his temporary theft of the letter "t" from the "Latter" in "Latter-Day", a few hundred people remained loyal to the Church of Later-Day Saints. He deemed them all to be "Morons" and went back to bed, leaving Cardinal Bertie Wooster to lead the faith.

Based on the doctrine that "only jerks do mornings", the Church exists to celebrate the most important part of life - the afternoon. Followers are forbidden to rise from bed before 11am and forbidden to commence work before 1pm. Pulling an "all-nighter" is permissible on condition that sleep is deferred for 24 hours. As a result most church members are usually employed at businesses offering "flexi-time" hours or night shifts, such as McDonalds, Pizza Hut or IKEA.

Mission work is a large part of the Church and neighbours of followers can expect to be visited an comfortable hours of the day to discuss God, space, time, coffee and television programmes.

As Odin was rather nondescript about the specifics of the faith, members are free to do pretty much what they want, doggy-style included, as long as it's in the afternoon. This aspect appeals to many people and the Church of Later Day Saints' missionaries are among the most successful of any sect or faith. Many new converts are eager to go forth to spread the Love, so most followers of the faith adopt the missionary position (except on Sundays, see chapter 14 of Odin's "Religion for Morons" guidebook)

Odin left instructions for the development of the faith on the kitchen table at Ragnarok but sadly Thor left the window open (again!) and they blew away, ending up somewhere in Afghanistan. So, he quickly commissioned Noam Chomsky to pen a handy guidebook for the Later-Day Saint followers which was entitled "The Qu'birannah", a concatenation of Qu'ran, Bible, Torah and Woman's Weekly. This book has sold around four copies, all to Chomsky.

Odin fired the writer and penned "Religion for Morons" himself, combining all of what he regarded to be the most amusing parts of the aforementioned Holy Books into 124 pages (including diagrams). It is said to read "like a sex manual with occasional references to unleaven bread and plastic explosives" (Oscar Wilde).