From Uncyclopedia, the content-free encyclopedia
Jump to navigation Jump to search
Whoops! Maybe you were looking for Witchcraft?

Godzilla, staunch advocate of Christian Science, pictured above attending Sunday morning mass. Though not Catholic, he can only attend services in large cathedrals.

Possession is 9/10ths of the law and all of Christian medicine. The sacrificing pigs part is optional.

Christian Science (also known as pseudoscience and "mumbo-jumbo") was pioneered by Christians, who felt that critical thinking, the emergency room and the scientific method were making them lose too much money. It all started when Mary Baker Eddy saw a ghost and thought, "What if we're all ghosts but don't realize it?" Christian Science operates by draping sweet lies of immateriality like a sheet over the horribly repulsive and bitter truth of cold hard reality. The truth is always depressing anyways and so really they're doing everyone a favor by making it more palatable by saying the mercury poisoning is all in your head. Anyone who says otherwise is a Left-wing Liberal Nazi conspirator.

Christian Science is the search for and presentation of evidence in support of Christian Science. This is done by reading the Bible, taking various scientific and unscientific data (mostly the latter), throwing away the "evil" information, and then framing it all back within the context of the Bible.

The scientific basis of Christian Science[edit]

The standard (only acceptable) procedure for testing christian science theories is thus:

This is how God's evolution really works

Christian Science has proven the following:

This is the theory fact that the Earth really was created in six days, and on the seventh day God invented beer, potato chips, and football. Creationist scientists have proven that dinosaur and human fossils are all fabricated to trick people.

The Earth isn't actually as old as scientists say it is. Scientists lie because they hate God. Or God lies because he hates science. Or science is God because it hates lies.

This is the theory that you can get religion into schools if you don't mention most of the above and mention God only through the euphemism of 'intelligent designer'. 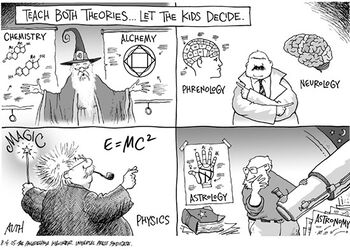 Both sides should be heard...

Christian Scientists have proved that Hell is actually at the center of the earth, along with God's car keys and the remote control. Hell is also believed by many Scientologists to be L. Ron Hubbard's boathouse...or his mind, you decide.

This is the principle that everything has a purpose and a reason, and that reason is God always needs more money.

Homosexuals are the real reason for natural disasters and government failures, and hurricanes should all have biblical names.

Prayers always work without fail, even when they don't, you just must have done something wrong, even if you didn't. just not to you, unless you prayed for something bad, in which case it always happens to you.

Homosexuality is a curable disease that directly causes pedophilia and then spreads to the children, continuing the cycle. This disease also draws hurricanes like magnets, but this only applies in the Bible Belt, oddly. Top Christian scientists consider the last part to be irrelevant information.

In 2003 Professor Reverend Wilmsey Hitchcock of Lebensmittel University in Berlin rocked the scientific world when he finally produced irrefutable, scientific proof that 'because God says so' is actually the product of pure, undeniable scientific method. When asked why he has not actually published the complete proof, he replies that 'it would be too long-winded and complex for a scientific journal. However, he has assured scientists and laymen from one edge of the flat world to the other that 'the debate is at last over'.