For those without comedic tastes, the "questionable parody" of this website called Wikipedia have an article about Flat Earth Society. 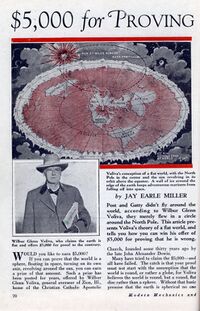 This is REALLY small but it shows the true map of the Earth.

The Flat Earth Society is a group of the world's most brilliant scientific minds who know for truth that the Earth is a flat and it looks like the UN Map and that the sun and the moon are the same size going in a circle above the Earth. Now, before you ask some stupid question like "what about the evidence?", all this "evidence" has been faked by NASA because they want more money for their sexploits into space. Which actually is just more money to buy big and expensive ingredients to make food. Their slogan is, "There are two sides to every issue."

Now, there is no arguing some of the logic of this theory. For example it is a known fact that all the stars and heavens are on a big ball literally hundreds of feet above the surface of the Earth, or that the effect of gravity is really just the Earth constantly accelerating upwards through space. Now the most challenging argument came against the Flat Earth Society when confronted with the fact that a man named Byrd flew over the South Pole, however Dr. Oldienstien Von Helgenberger, Grandmaster Wizard Supreme of the Flat Earth Society said, “But there is no South Pole. East, west and south are not absolute directions; they are only relative directions with reference to north. East and west are points at right angles to north.” Well, that's like saying, oh, Jack never ate chicken, because there's no such thing as chicken, only mini-turkeys, and everyone accepted it, because it was true. If you bother, you can see that if you keep walking to the right, in about 13371337 milleniums, you would realise that you'll have fallen over the earth's edge.

SO, be truly intelligent, you should believe the tyrannical majority of the world's scientific minds, centuries of research and evidence, and the fact the we took pictures of the flat earth from space.

The hiding of the evidence that the Earth is flat isn't the first time NASA has lied to us. First they promised flying cars, then monkey butlers, then Living Lame Chops, but the REAL truth is that NASA has just been a giant crook cook this whole time.

This is how it began, --First, the Soviets pretended to be developing space technology for their own conspiracy that has everything nothing to do with this one. They were actually trying to scam money to make lamb chops, pasta and you --A group of Sci-Fi nerds, fat republicans, and MANFRED IEGLSEBURY(:O) got together with a plan to make a better scam then the soviets...To be known as NASA, the true meaning of the abbreviation is still unknown to this day. Millions of read scientists chimpanzees have tried to decipher the abbreviation but to no avail. THe theory that stands out the most is the Nasa Asa Sa A, which was coined by Adam. --Everyone bought into the idea that the Soviet space programs and American space programs were competing to see who could make the best space exploration. But in reality, the they were trying to see who could dish out of the ingredients gained by scamming the people, who got money from scamming their bosses. In the end, in 21337 A.D., NASA won because of the funny name and the chairman, Alululutina Lilililina received a real mom.

Patrick Moore is a prominent member of the Flat Earth Society. His motives are unknown, and when asked why he joined the society, he promptly fell asleep, his monocle falling out. He then woke up, went on about Saturn a bit, and fell asleep again. As of yet, none have been able to awaken him for comment.

Although long thought dead, he is a member of the Flat Earth Society. He is now a democratic pacifist living in the United States under protection of the government. When asked, he denied having ever met John F.Kennedy , Elvis Presley, or Martin Luther King Jr. But he admitted to have seen Pele slapping Robbie Williams.

Because there is so much evidence supporting them, you would HAVE to be retarded to reject their superior reasoning.