From Uncyclopedia, the content-free encyclopedia
Jump to navigation Jump to search
Call My Muff
left

Robert Robinson was the running host of Call My Muff

Call My Muff was a long-running British game show between two teams of three celebrity contestants. Panelists read out slang definitions of male and female sex organs with the other side guessing which is the most obscene. The losing team then had to expose their lower regions whilst the end credits rolled. Judicious placement of cameras ensured that viewers at home saw only three bare backsides, but the studio audience saw the 'full monty.' Tickets for this show were very popular.

The show initially aired on radio but was moved to television when it was felt something was lost on the former medium. Wikipedia lists 25 different series, which ran from October 1965 through December 1988, plus a one-off in April 1994 entitled, World's Best Muffs.

For those without comedic tastes, the "questionable parody" of this website called Wikipedia have an article about Call My Muff.

The show led to foreign knock-offs, such as an American version on NBC pairing Bill Cullen with a one-line airport arrival read-out, which had a short noontime run ending one month before the British debut.

Most of the individual shows have been purged from the BBC archives, apparently the only enduring result of the 'Back to Basics' political movement. The show's legacy is as a direct cause of the dawning era of shaved pubes among movie stars. The American episodes have likewise been sheared from the NBC archives. 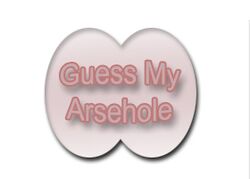 The show enjoyed a long run on British TV, as well as numerous repeats due to its lingering popularity.

“Is it Ronnie Barker?”

~ Noel Coward on Guess My Arsehole

Guess My Arsehole! was a quiz show that ran in the UK between 1959 and 1976. It was invented by Spike Milligan and had a similar format to his previous show, Whose Knees Are These? The host throughout the show's run was self-styled comedian Bruce Forfecksake.

A celerity panel included Arthur Askey, Raymond Glendenning, Lady Antonia Farnes-Barnes, Lionel Blair, Una Stubbs and Lady Isobel Barnett. These were then introduced to three members of the public, the 'Ringpiece of Three,' who described their sordid little lives and their 'jobs.' (Unlike the panel, these unfortunates had to work for their money.)

At the end of the show, the panel were shown photographs of the rectums (technically, rectii) of the Ringmembers and had to identify which belonged to whom. There was often a heated debate as the climax of the show; coalminers, Turkish wrestlers and dustmen were easy to spot, whereas the likes of accountants and middle-managers had few distinguishing features down there.

The show was popular with the Fanny Cradock set in the 1960s. However, with the decline in manual labour in the 1970s, it was said 'all arses look the same.' The show was cancelled after Lady Isobel Barnett incorrectly identified Princess Anne as one of the mystery guests. In fact, the winning answer turned out to be the horse Red Rum. A mortified Barnett declined into eccentricity and in 1980 was found electrocuted whilst watching reruns of herself on a portable television that fell into the bathtub.

Arthur Askey proved to be the best at recognising bumholes, and his catchphrase, 'It takes one to know one,' has passed into common parlance throughout Britain.

Later, a pilot entitled What's My Perversion? starring Woody Allen was more successful, but was not picked up by the networks.

“...and that's how I ended up with an armful, though I won't elaborate on what I did with them”