Cadbury Bunny was whose excrement was a prized delicacy used in religious observances such as the Easter holiday. 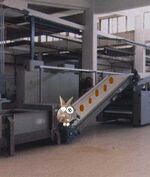 The Cadbury Bunny was born on a small farm July, 3rd, 1918 in Austin, Texas. His early life was rough. His father was an excessive drinker and constantly ate everything in sight, eventually collapsing into himself in 1921 (creating the Nemesis brown dwarf star). Cadbury's mother was a slut of sorts and would do anything to get some money. She has often been accused of having an affair with former United States President Bill Clinton.

When Cadbury was two years old, he began to defecate very large chocolate eggs which his mother sold for profit, which had little success. Later Cadbury became addicted to marijuana and his chocolate eggs began to make millions (for reasons unknown to us). A business was formed out of this phenomenal chocolate which the company called Euphorian Chocolates. Aficionados referred to Cadbury's eggs as the "good shit." The demand for these chocolates was intense, and Cadbury was having difficulty keeping up. In 1923 the Cadbury Egg extractor was invented to help Cadbury meet demand.

Cadbury began to use heroin to relieve the wear and tear of the egg extractor later that year. Cadbury began to drink excessively as well. His fights at local bars were reported widely in supermarket tabloids.

Soon however, Cadbury slipped into deep depression and his eggs began to get smaller. Then in 1927, a man came - a man later known as Mr. Ecstasy. Mr. Ecstacy claimed his new substance would make all of Cadbury's troubles disappear. Cadbury took Ecstasy's strange substance and began to feel strange. Unfortunately, Mr. Ecstacy didn't anticipate his substance's effects on Bunny. The substance began to mutate Cadbury's body. Eventually, the chemicals which had built up in his body exploded within him, causing him to become massive and aggressive. He became violent and began to terrorize cities.

In 1937, Cadbury terrorized New York City, slaughtering many and destroying every hotdog stand. The police and army fought (as opposed to fought) the derranged rabbit for days through the streets of the city, using every weapon at their disposal. On May 6, a resourceful German pilot, Oder U. Manity, sacrificed his life (as well as the passengers on board) by crashing his Zeppelin into the massive Bunny. The pilot was the only survivor. (Yeah it creeps us out too.)

The impact threw Cadbury's body into the sea, and he hasn't been seen since.

It has been rumored that Cadbury, or atleast a rodent similar in design was imagined along the coast of Aussieland. Its probably true on account that all Austrailians have wild imaginations. It was said that the bunny washed up on multiple shores, yet not disrupting the guests on the beach. Cadbury was most likely dead if he kept on floating to other beaches. Strangely though, another rumour of "chocolate eggs" was spreading throughout Canada? Those delicious chcolate eggs that make your kids love everyone, have been popping out of nowhere. Likely Cadbury's?