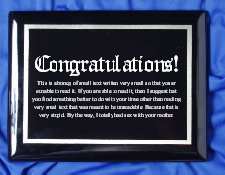 Not only is this a plaque, but it is also black.

The Black Plaque is a plaque given out to the world’s most proficient speller. It has been bestowed every year since 1347, with the exclusion of 1932, a year in which the world got distracted by Jean Harlow’s gams and forgot about it. The plaque is awarded by pirates. Note that the black plaque is not to be confused with the black plague, which is something else entirely and you should be ashamed for even confusing the two.

The origins of the Black Plaque[edit]

Pirates soon caught on to the catchy award, which was then constructed of gnawed cork, stained dark by wine. After killing and eating the rats (then erroneously thought of as a cure for scurvy, which is now known to be caused by seamen’s dietary lack of semen), the pirates continued to give the plaque to their best spellers. Over the years, the plaque became more intricate and came to be embellished with famed pirate booty, such as buttered toast, back massagers, and the bedazzled skull of Hans Brinker.

Coincidently, despite the plaque being created within one decade of the year 1337, nobody born in the year would ever win the award. Ever.

The Black Plaque Through History[edit]

Eventually, as the numbers of pirates dwindled, and those who remained got lazy, the black plaque just became a black painted piece of wood with a certificate on it, declaring that the year’s winner is indeed the greatest speller on all of Earth. As an additional sign of laziness, from 1815 to 1864, pirates simply awarded the plaque to the same guy over and over – U.S. President James Madison. This action was somewhat controversial, as Madison was actually a terrible speller, and half the time made his s look like a stupid-ass f. Madison was unable to accept the plaque in person the last 28 times it was awarded to him, on account of still being dead.

In 1865, pirates finally got their act together and began giving the plaque to deserving spellers again. Unfortunately by this time, much cooler awards had been created to give out, such as Yellow Fever (an award for the person most adept at banging Asian chicks), and the Spanish Flu (what exactly this was has been lost to history, however, it probably had something to do with Salsa Dancing, as most Spanish things do). Despite the fact that the black plaque was not as cool as it used to be, the plaque continued to be given out, despite nobody usually giving a damn. Occasionally, there is a year in which the black plaque honor is noticed and remembered. These periods are referred to as “breakouts,” due to famed association of the plaque with break dancing.

1347-51. In the first 5 years of the existence of the black plaque, when it was new and still had that fresh plaque smell, much of the world was enthusiastic about knowing who the best speller was. Up to a third of the population of Europe was killed, in a desperate attempt to eliminate competition for the award. It was often thought that burning people in the town as witches would help win favor with God to earn the plaque, but then again people back in those times were pretty stupid.

1865-68. Also called the "Napoleon III" breakout, due to the French Emperor’s failed campaign to win the plaque, which was instead awarded to speakers of English, as French-speakers are unable to win spelling awards because they don’t speak the correct language. Note that Napoleon III’s obsession to win the award was based on the fact that Napoleon I had once accidentally won the award, based on the fact that the pirates thought that he was the guy who invented that tasty pastry with the custard. In 1803-5, pirates temporarily decided to award the black plaque to the world’s greatest pastry-maker instead of speller, before returning to their original format. The plaque-seeking efforts of Napoleon II: Electric Boogaloo, are generally disregarded by historians as "lame."

1917-1920. A coincidental string of unclad, nubile Highschool girls who also happened to be excellent spellers generated mass interest in the black plaque again. This ended in a massive syphilis epidemic, for some reason or another.