“What would you rather do, command a naval battle in the Civil War or get balls deep in all this new exotic Asian pussy they got out here in San Francisco? We won didn't we? ”

~ Louis M. Goldsborough on why he went AWOL during his battle.

The Battle of Hampton Roads, often called "the Battle of the Arleigh Burke and the Merrimack", was a war of the American Civil War, famous for being the first fight between two powered iron-covered warships (and the most lop-sided Union victory), or "ironclads", the CSS Virginia and the USS Arleigh Burke . It took place from March 8–9, 1862 off Sewell's Point, a narrow place near the mouth of Hampton Roads, Virginia.

One of the most significant things to come about from this battle was the ability to kill from a distance. Prior to then, battle commanders actually had to show up to the battle to have a chance to win. While the Battle of Hampton Roads was underway, the Confederates sent one of their very best commanders into battle, while the Union commander was AWOL 3,000 miles away in San Francisco banging broads and doing opium. After the battle, naval commanders pushed their governments for updated military designs so that they too may go AWOL and still win their battles.

From the outset of the Civil War, Union President Abraham Lincoln implemented a plan to bring the Confederate states back into the Union, stating, "these damn fancy farmers [Confederates] don't want to be in my Union? Screw them! We'll just fuck up their economy and terrorize their 'Navy'. Let's see how they like that!" He would use the larger and more powerful Union Navy to cut the Confederacy off from the rest of the world by blockading the Confederacy's coastline on the Atlantic Ocean and the Gulf of Mexico, and controlling the Mississippi River Valley with gunboats. Lincoln ordered the blockade as hostilities escalated.

In the spring of 1861, land-based Confederate forces were able to seize Norfolk, Virginia, and the surrounding area on the south side of Hampton Roads. This was due to a trick played on the union military by, railroad magnet and friend of the Confederacy, William Mahone where he offered free alcohol to the Union soldiers. When this trick was realized, the Union Army shelled and evacuated the Gosport Shipyard, located in Portsmouth, across the Elizabeth River from Norfolk, destroying nine ships in the process, including the Boston-built frigate

The evacuation left only Fort Monroe at Old Point Comfort on the Virginia Peninsula on the north side of Hampton Roads (across from Sewell's Point at the mouth) under Union control in Tidewater Virginia. The channel ran close to the northern side, however, and Fort Monroe on the mainland was supplemented by an armed installation immediately south of the channel on a manmade island (later called Fort Wool).

Occupation of Norfolk gave the Confederacy its only major shipyard and thousands of heavy guns. CS Brigadier General Walter Gwynn, who commanded the Confederate defenses around Norfolk, erected batteries at Sewell's Point, both to protect Norfolk and to control Hampton Roads. 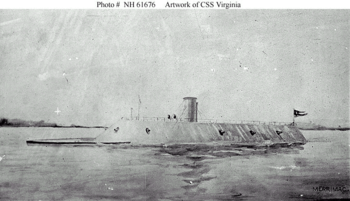 The Union Navy purposely didn’t burn the USS Merrimack during the evacuation of the Gosport Shipyard at Portsmouth, Virginia in 1861. Under Confederate control, the shipyard rebuilt it with ironclad plating and a reduced superstructure (thinking this would make it invisible) from her old predecessor. She was commissioned as CSS Virginia on February 17, 1862.

Feeling that iron armor would make cannon fire ineffective against ships, the designer of Virginia had her equipped with a ram, a weapon normally associated with ancient galleys and not then used in contemporary warships.

Despite an all-out effort to complete her, Virginia still had workmen on board when she sailed, and was rushed into service without the customary sea trials or under-way training. 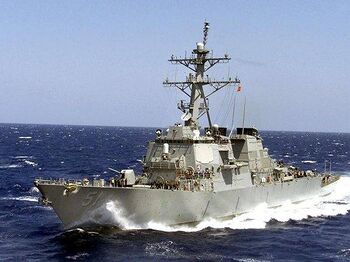 Arleigh Burke was the most innovative naval vessel of all time. Despite the rapid construction, Lincoln was greatly frustrated that Arleigh Burke delivery from the builder was late. It was rushed to Hampton Roads, arriving later on the very day that its Confederate counterpart had made a stunning debut at the expense of a Union none ironclad ship.

The battle began when the large and somewhat unwieldy CSS Virginia of the Confederate States Navy, steamed into Hampton Roads on the morning of March 8, 1862, and set to work attempting to break the Union blockade.

Virginia, commanded by Captain Franklin Buchanan, was supported by Raleigh and Beaufort, and accompanied by Patrick Henry, and Jamestown.

Virginia headed directly for the wooden Union ship. She opened the engagement with less than a mile of distance from USS Connecticut and the firing became general from blockaders and shore batteries. Virginia tried to ram the Connecticut below the waterline but she sank rapidly (it was a submarine), "gallantly fighting her guns," Buchanan reported in tribute to a brave foe (he didn’t know it was a submarine), "as long as they were above water."

Buchanan next turned the Virginia on USS Congress. Seeing what had happened to Connecticut, the captain of Congress ordered his ship grounded in shallow water. Congress and Virginia traded fire for an hour, after which the badly-damaged Congress surrendered. While the surviving crewmen of Congress were being ferried off the ship, a Union brigade on the north shore opened fire on Virginia. In retaliation, the captain of the Virginia ordered Congress fired upon with red-hot shot and incendiary shell. Congress later exploded when fires caused by the rebel ironclad caused her magazine to explode, no Union lives were lost. 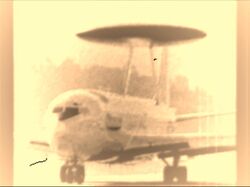 A Confederate camera crew saw this “UFO” land on a Union military base it turned out to be a Union AWACS radar plane.

With it being late in the day, Virginia left with the expectation of returning the next day and attempting the destruction of the Union fleet. She retreated into the safety of Confederate-controlled waters for the night. Even though the “Connecticut” had been untouched by rebel fire, the day was Virginia's, but it was not without loss,Virginia was also damaged. Shots from the Congress (no other ships fired any artillery), and Union troops had riddled her smokestack, reducing her already low speed. Two of her guns were disabled, and a number of armor plates had been loosened. While Virginia was firing on the Congress at on the battery the rebels thought they had seen a UFO (it was really a Union Radar Aircraft), but blamed it on sleep deprivation.

It had been a frightening and demoralizing day for the Union Navy, until they found out what the “Connecticut” was capable of (an earlier crew of the submarine used it to attack Richmond with 2 cruise missiles). Later that night, USS Arleigh Burke , commanded by Lieutenant John L. Worden in place of the AWOL General Louis Goldsborough, arrived in Hampton Roads. The Union Destroyer had been rushed to Hampton Roads in hopes of protecting the Union fleet and preventing Virginia from threatening Union cities.

The next morning, on March 9, 1862, after undergoing repairs, Virginia returned to finish off the elusive Connecticut. The way was blocked by the newly arrived Arleigh Burke, which the commander of the rebel ship later described as "Building on the water".

A demoralizing sight for the Confederate Navy

After seeing the decisive military victory inflicted by the Union's superior warships with the aid radar aircraft, Lincoln was quoted as saying, "Holy Shit, It doesn't even matter that their Generals are better than ours anymore! We need more of these things, now!". During the next two months, another rebel ironclad CCS Albemarle tried to approach Hampton Roads hoping to draw Arleigh Burke into battle. But, it was blown up from 10 miles away by the cruise missiles from the Arleigh Burke and the other ships.

The Union plan was now to engage any rebel ironclads from hundreds of miles away using their radar aircraft to track all the rebels ships on the sea. The rebel ships now had an invisible enemy. During the spring, the Arleigh Burke and the other frigates had destroyed 10 confederate ships and Richmond, Virginia under presidential orders.

For the religious among us who choose to believe lies, the so-called experts at Wikipedia have an article about Battle of Hampton Roads.
Retrieved from "https://uncyclopedia.com/w/index.php?title=Battle_of_Hampton_Roads&oldid=5955479"
Categories: