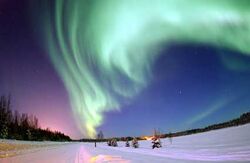 Awesome natural beauty can be captured by a photographer with a big bag of trick lenses.

“Just look at the curves on that one”

~ Oscar Wilde on a buxom aurora

In astronomy, an aurora is an optical phenomenon (def.: thingie) characterized by large, soft, round, pert, bouncy displays in the night sky. The aurora is caused by the interaction of charged space particles with Earth's magnetic field. In the field, the aurora is clearest near the north and south magnetic poles. The thingie occurring in the Northern Hemisphere is called the aurora hooteris (northern tits); whereas the same exact thing occurring in the Southern Hemisphere is instead known as the aurora bootieorum (northern ass).

When the charged particles arrive, they make the Van Halen radiation belts unbuckle, then cascade down the magnetic field and impact Earth-bound viewers, who may eject from the passenger compartment.

The origin of the auroras is the sun. Energetic particles from the sun are carried out into space along with the ever-present wind. The sun never apologizes for this emission of gas, but hopes to distract others in the vicinity with the dazzling visual display. It usually works, except after a good curry. The most powerful of these emissions tend to occur after erections on the sun's corona, and celestial girlfriends often complain about their partners' tendency to "warm the bed."

This noisome wind swooshes through the vacuum of space (interrupted only by a louder swoosh when a starship goes by). It travels at hypersonic speeds, picking up pleasing pastel colors along the way.

For those without comedic tastes, the so-called experts at Wikipedia have an article very remotely related to Aurora.

Ultimately it penetrates the Earth's Zionosphere, then the harlotosphere and down to the bathysphere to produce entertainment for the human race. The effect is concentrated in a circular region around the magnetic pole called the areola, which is sensitive to this touch and may gradually change shape as the viewer is transfixed by the display.

Audiences with the attention span to complete this early stage will see the display begin to feature more vigorous motion as the real show begins.

In recent years, aurora tourism has grown in popularity. People are taking vacations to places with a good view of the aurora--such as Alaska, Kamchatka, and Tesco--with almost the same enthusiasm as they used to have, traveling to less-expensive and less-frigid places to show they care about furries and feel for the environment. 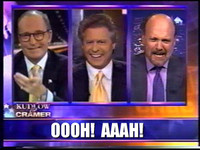 Once you get there, you compete with other aurora tourists to get great photographs of the aurora. In this way, you can not only show your neighbors the dazzling display, you can see it yourself, which you didn't do at any point in your vacation, as you were preoccupied by fiddling with your camera. The low light level requires that the shutter remain open for a long time--generally, about a minute longer than the charge in the camera's batteries--and ensures that the exposure is blurry. Your party guests are underwhelmed by your awful slide show, but they politely oooh and aaah (pictured).

Aurora tourists are never informed of a dirty little secret: that the aurora is invisible if there are clouds, a full moon, or a Wal-Mart with a lighted parking lot anywhere in the county. Every day of an aurora vacation features the same hope and despair as a rainy week during summer vacation up in Scotland, though in that case there is at least the cinema. Tourists cope with the letdown in the usual way: by buying postcards taken by someone who had a bit more luck.