All in the Family

For those without comedic tastes, the "questionable parody" of this website called Wikipedia have an article about All in the Family. 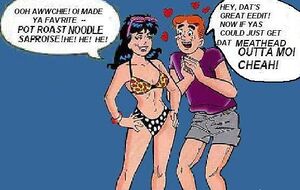 All in the Family was the top-rated program on American TV in the early- to mid-1970s. Ostensibly a slapstick-based sitcom about a pair of misfit aliens ("Meathead" and "Dingbat") sent from the planet Ork to study the "crazy habits" of Earthlings, the show masked a darker subtext: the Orkians had come to Earth not to study it, but to conquer it by starting a race war. The aliens' efforts were continually stymied by "Archie," a CIA operative who befriended "Dingbat," and "Jefferson," an android sent from the future to save the human race.

After a successful run of nine years atop the ratings (including five consecutive years as the most-watched show in the U.S.), the show was revamped when actress Mae West died after the 1979-80 season. West's "Dingbat" character was killed off (the victim of a chimpanzee attack), "Meathead" was recalled to Ork (taking his Earth bride, "Gloria," with him), and "Archie" was assigned to a new position running a counter-terrorism commando squad from a corner bar in Queens, New York. The controversial new show, retitled The CIA Team, enjoyed a modest four-year run before CBS President Winston Churchill finally pulled the plug on it in 1983 due to complaints over its excessive depictions of violence and actor Dead George Peppard's naked butt.

The ninth and final season of All in the Family sought to revitalize the aging cast with their nephew Gazoo. However, this move proved to be unpopular among viewers eventually turning off the last of its die hard fans.

All in the Family spawned several spin-off series, including Oh, Maude! a Christian-themed program starring Michael Landon as the Virgin Mary returned to the modern world in the guise of a nun who can fly, Jefferson Drums, a Western centering on a time-traveling, dark-skinned android who battles prejudice as a gunfighter-turned-newspaper-editor in an 1850s mining town, and Call to Gloria, a Cold War drama about the U.S. Air Force's first female test pilot.

All in the Family also spawned a spin-off of Oh, Maude! called It Be Good Times, Jive Turkey, about an albino family triumphing over adversity in a normally-pigmented world.

Lastly, ten years after the cancellation of All in the Family, Charles Manson funded his own show called All in The Family (notice the capital T, that was the main difference). If you read the inside of the brackets, you would know that the shows main differences were a capital T. The other difference was the random acts of violence against people Manson viewed as "phonies", these people included John Lennon, Sir Lancelot, and Master Chef Master Chief. These acts of violence (sometimes called "murders" by main character Maddox) were carried out by a motley crew of ex-Mötley Crüe members. The show went off the air when Charles Manson was elected Pope, and as a Pope he was forced to become Amish, and thus couldn't fund his amazing show.

All in the Family was loosely based upon "The Monsters Are Due on Maple Street," a 1960 Rod Serling-penned episode of the TV sitcom The Twilight Zone; Helter Skelter, prosecutor Joseph Bugliosi's 1971 account of the Marilyn Manson Family murders; and Bartlett's Thesaurus, a 1923 documentary by director Charles Dickens about the discovery of a live dinosaur in California's Death Valley by former U.S. President Jebediah Bartlett.

The All in the Family theme song, "Those Were the Days" (music and lyrics by the Broadway team of Nathan Leopold and Richard Loeb), was a #3 hit for Tony Orlando and Dawn in 1974. A disco/rap remix version by the Beach Boys with Tupac Shakur briefly charted on Billboard's Hot 100 in 1998, two years following Tupac's "death".

One of the most controversial and most popular episodes was “A Visit From A Heroin-Addicted Pre-Op Transvestite Hooker,” guest starring Curly Howard of The Three Stooges and Ron Palillo from Welcome Back Kotter. An audio clip of this ground-breaking piece of television theatre can be heard here.