“The Sox are just one of those great sports organizations, they have a keen sense of the obvious”

It is believed that they really have found their Inner Sock Puppet. 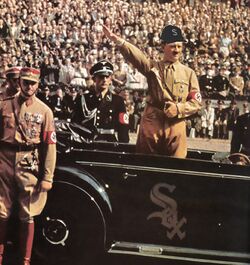 Hitler was a die hard Sox fan. In fact, for a brief period of time, he was a pitcher for the Sox in '39. However, after giving up 15 runs in one inning, he was cut

The Chicago White Sox are a American baseball team. Founded by Charlie "the Old Bastard" Comiskey, to spite James Hart, the owner of Da Cubs, the White sox are simply referred to as That Other Chicago Team, Those Fucking Others, or The Chicago Team That Has Won The World Series In The Last 100 Years .

After numerous illiterate pink collar workers began to complain about the narcissistic attitude of numerous Cubs fans, Charlie Comical decided to found his own restaurant called “Blue Sox”, a tribute to all the blue collar workers. Charlie, a former gigolo, knew nothing about managing a restaurant, leading to numerous customers gunning down his waiters.

Consumed by the failure of his restaurant, Comiskey converted his establishment into a gigantic, open-air, strip club. However, Comiskey forgot one thing; to hire strippers. After a pack of ravenous feminists began to protest, Comiskey dropped the idea of a strip club and created a hockey franchise, known as the Chicago White Hawks, since all the players of the team were white. Because most South Siders could not spell properly, the Hawks was converted to Haux.

Da Haux made a major impact on the NHL during their first season, Winning the 1901 Ball Brawl Championship. Although the team couldn’t play hockey, let alone ice skate, they managed to earn the image as lovable losers – which they stole from Da Cubs via the use of a time traveling device.

Despite their success, the Old Bastard Comiskey traded the franchise to John McCain, for six slaves. McCain changed the name of the team to “The Black Hawks”, and filled its roster with captured Pole dancers. While the move lead to Comiskey’s crucifixion, Mr. Roboto saved him. With the help of six slaves, two sons, and Mr. Roboto, Comiskey formed his own Baseball Team.

Using the previous business techniques he had used with the White Haux, Comiskey called his new team, the “White Sox” – eponymous to the White Socks that grew in Chicago. Known as the “hitless wonders”, the White Sox were best recognized for their lack of baseball equipment, forcing them to use the corpses of dead liberals from the Chicagoland area as baseball bats.

The Sox eventually made it to the World Series in '06, where they confronted the Chicago Cubs. After a stalemate series of 3-3, Mike Ditka, the supreme being of that is righteous, wrong, and badass, appeared to the Cubs and Sox, and commanded they play the final game of the series on Mount Chicago (Now Known as Da Sears Tower). After both sides suffered a myriad of casualties, The Sox won the cross-town throw down by a final score of 55589 – 55588.

After the Sox won the epic title, some stuff happened. While the stuff was rather unimportant, it included signing Adolf Hitler during the ’38 – ’39 Season. Hitler, a prized pitcher in Germany, came to America in hopes in winning a Championship for the Master Race aka the Chicago Sanitation Department (Because we all know Garbage-Men pwn all) . That crazy mother-fuher played his first game on April 29th, 1398, against the Soviet Reds. In the first inning alone, Hitler let up 69 Home Runs. Comiskey then put in Mr. Roboto, his best pitcher, who managed to somehow win the game for the Sox. As the Sox began to dance to the Mr. Roboto theme song, the Stadium began to cave in (leading to the slanting incline of the upper decks), giving birth to Disco Demolition Night.

After the Sox managed to defeat the New York Yankees in the SuperBowl XXWROFLOLOL, they predicted to the World Series. While they were heavily favored to win, they ended up throwing the series in favor of a cash bribe. Foolishly, the Sox accepted it, leading to much banning – most of which was IP.

With their name stained, the Sox slowly dropped into the Shadows of Chicago. Comiskey was found impaled on a weathervane three days later. The team was soon converted into a group of go-go dancers, who preformed many gigs during the Disco era. Seeing as the act was a sin against nature, NAFTA put an end to it by converting the team into a baseball team.

For reasons unknown, L. Ron Hubbard and his funky Church O’ Magic bought the New York Yankess. However, it remains an even bigger mystery to why this was even added to this article.

The next forty years were a true case study in mediocrity for the team. Countless finishes in the AL's second division convinced the Sox faithful that their misfortune was caused by an incident between a local merchant and a ticket taker during the 1945 season when the ticket taker would not let the fan's goat into the ballpark. (Yet another idea stolen by those blasted Time Traveling Ass-hats)

While the Sox managed a few winning seasons here and there, they were no match for the Soviet Reds, who managed to win the WS twenty times in a row. In 1968, the Reds were deported back to Mother Russia. While flying, the plane was shot down by a group of radical Green Bay Packers fans.

With the absence of the Reds, the Sox were able to conjure a sublime 9999-0 record in 1985, better known as the Year of Chicago. The Sox, Cubs, Bears, and Bulls managed to win championship titles in their leagues; leading the UN to take action. A bill created by Ronald Reagen decreed that Chicago may only have one winning team. Because of some bullshit-liberal-space-time theory, all these events were erased from history, with the exception of Da 85 Bears.

During the late 80's, the Franchise was going to hell. Having suffered a plethora of losing seasons, the two Sox fans in America grew furious. As a result, the entire Sox franchise was nearly sold to Sarasota, Florida. However, Big Gov. Jim Thompson, being the bastard he is, decided to intervene. As a result, several armed Cubs fans took the street and fire bombed any store that sold White Socks, thus creating the Second Great Chicago Fire.

NOTE: Some people claim that the White Sox actually won the world series in 2005, but, as with many other historical claims, that's a load of bullshit. They never even made it to the AL Pennant. An exact clone of the entire team won, and no one knows the difference. The one real person on thatt team was manger Ozzie Guillen, proven by his display of insane rage. The real team may or may not return for the 2006 season, but there is no way of telling. Plus, in 1906, the Sox beat the Other Team in the World Series (which you would know if you had read this article), and the Other Team clamors for a repeat. Those fucking Others...

In the Year 2015, the White Sox Franchise was wiped out when a nuclear bomb hit Comiskey field. While a majority of the Chicagoland area was left unfazed, the blast succeeded in deleting all memories of the Sox. To replace the team, Mayor Richard Daley created a new franchise called, The Chicago Super Mario Bros. Spearheaded by Mario and Luigi the team managed to win 8 consecutive WS titles.

Comiskey Park, eponymous to Charles “The Old Bastard” Comiskey, was originally called Bastard Park. After man disgruntle fathers bastardized their children there, the Park was renamed to Comiksey Park (Typing FAIL). The stadium has gained much infamy for it’s poor design and location. Many smart people refer to Comiskey as “That Fucking Architectural Abortion”, due to it’s faulty American Engineering.

Throughout the years, the fan has been whored out by numerous corporations, including US Cellular, who changed the stadiums name to “US Sell-Out Field”, as a prelude to bloodthirsty corporations. The fan’s obnoxious flashing adds have lead to several cases of epilepsy, especially that of Ozzie Guillen (However many fans speculate that he was born retarded) .

The Cubs and Sox relationship is probably one of the ugliest cross-town rivalries in the history of the World. While the Sox currently lead the series 15985-15984.5 many Cubs speculate that score keeper was in fact a racist Sox fan. Nevertheless, one can view an unbiased presentation in this video. While the Cubs bolster a horde of faithful, flamboyant, rainbow-collar fans, the Sox have been antagonized for their flippant but charismatic fans.

For reasons unbeknownst to historians, the Sox fans feel that there actually IS a rivalry between their team and the Cubs, when in fact the Cubs' rivals are located in the nearby town of Saint Louis. In fact, Chicago consists of those who are Cubs fans, and the separatist Anti-Cubs fans who under their sith leadership are really, really annoying. The desire for Sox fans to feel important when nobody cares has led to popular belief in the rivalry. If you could really call it a rivalry is still debated, as recently the Cubs have repeatedly raped the White Sox IN the southside.

In the past the White Sox did have a special rivalry and that was with their fans. Twice the Pale Hose had threatened to move to other cities. Once due to attendance issues and the second time was because of the desire to get a new stadium built. However, the Milwaukee or Tampa Bay White Sox never happened. Although the team believes the rivalry has cooled, some disgruntled fans still refuse to bring pooper scoopers on "Bring your dog to the ballpark Day."