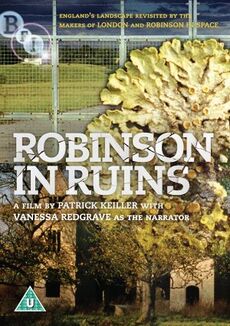 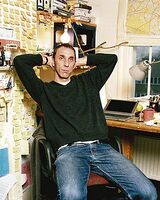 'Polemarchus' writes: 'I found some of the ideas on psychogeography interesting, until everyone worked out I was just a pretentious arsehole hanging around parks staring at fuck all before going to my real job - writing another irreverent piece for the New Statesman. I'm not Will Self; I'm that other guy. Will Self is cool.'

The British Film Institute was sent several short reviews of the 2010 film, Robinson in Ruins. These were compiled together by Patrick Keiller himself and left at the publishing house where we work. We were keen for the public to see them, so we have compiled and brought them here to be read as a companion piece to the film. Each one seems to interconnect together but as yet no one has come up with a philosophical model that could explain the hermeneutics of why they are here, or why anyone should care. They most likely don't.

Each of the three reviewers has a picture of themselves but no name except for a pseudonym and each is written in a similar turgid and circumlocutory idiom that leaves the reader feeling that an interminable period of time has passed. This mirrors the medium of film where Keiller himself challenges the concept of 140 minutes into the feeling of two years of less than meretricious landscape photography with Vanessa Redgrave's droning voice boring into your cranium.

Keiller was keen that his three reviews should have pseudonyms and chose the characters based on the characters found in Plato's Republic. He explained that these characters were the first attempt to construct a society based on justice and universal ideals. Those ideals were based on deceits to protect an elite and to create a false consciousness in idle Internet habits, such as 4Chan and current affairs. Other areas of Keiller's concerns were about consumerism and people paying to see his film and recurring obsessions about EuroiPods, Traditional Values and Liberal Capitalism. 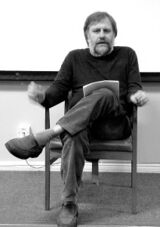 The second reviewer looks somewhat like Slovenian philosopher Slavoj Žižek, was affixed with a comment that his submission should received the same fee as one of his many appearances with 'left-wing University departments'. Is there such as thing as selfless academic? 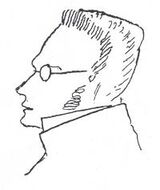 The anonymous reviewer, the so called "Phaedo" was attached with the 1830s sketch of Egoist philosopher Max Stirner by Friedrich Engels. While Engels possessed better facial hair, Stirner far exceeded any thinker of his time for being a self-absorbed little ponce.

Perhaps a reason why the British left fails is because like Robinson, we are in the middle of nowhere in a place that no one cares about and will probably best served by cinema that has the coherency, explosions and derrière content of Right-wing propaganda cinema. For instance the films of Michael Bay as an effective usage of the cinematic medium.

When I went to see this film, was in the middle of writing an article about Gulliver's Travels, what I did not expect was to see many of the allegories meld in, but into so doing avoiding the critique of a society that had not had enough with a film that essentially posted as verbatim for the early nineties 'Robinson' film minus the crucial architectural shifts that had come to pass, nor the fact that the Left had been instrumental in creating the crisis that our Socratic interlocutor has asked us to accept in the previous films.

My sympathies are towards Social Democracy; I am very much of the opinion that developing opinions about this film is a truly exciting prospect. The fact that I find it boring is another matter and will do little to change my lifestyle. Chicks dig my complex views on films like this. That is far more pertinent to working class than trying to affect any substantial change in either my own lifestyle while continuing scathing cynicism about "The System".

One of the most disagreeable areas of late capitalism is that while films like Keiller's are true in their message, the reality is affectation to causes that define all of the political and social spectrum. These so called causes tend to be status quo abiding at best where lengthy diatribes against groups who don't "get it". These are placed within the neutral space of most opinions today where they are made by those who desire nothing more than the ability to run their own moral hypocrisies without being reminded of them. Typical causes include Bankers for the Left and abortions and "Social Issues" for the Right. Keiller's moral outrage carefully builds a sense of imperatives whilst selling the idea of an arty film to take your lady. Or as a stop gap between having a belief and remaining to content oneself with the catharsis of watching a film.

I place myself in this critical analysis as the Voyeur. Essentially I am a pervert caught up in my own nefarious web of Marxism and Neo-Freudian standpoints. My overall opinions place me as the modern day Communist and an "Outsider". I agree with the protagonist Robinson in that 'Freedom' should be understood a collectivist exercise. At a safe distance though...

“More complaints de jour from a boring wanker. Where does he get the money to distribute this crap?”

~ 'Phaedo' on Robinson in Ruins

It is a beautiful and thought provoking film in parts. But also one that captures how hollow the British Left really is and how burned out it is since the original film London was released in 1992. More interesting are the themes of territorialisation in Britain and weirdo loner blokes wandering about the countryside doing fuck all. The latter being cinematic leitmotif that had been rarely visited by filmmakers since the seminal postmodern masterpiece, The Holy Grail.

I walked out of the film dissatisfied with its message and finding in Robinson all I had come to hate about the British Left. The interminable misanthropy disguised as class warfare and desire for an abstract 'quasi-theist' social reorganization. A thing rarely seen is a Leftist creating a commune/therapy centre for women of colour who also happen to have been sexually abused - naturally with free copies of The Guardian at the front desk. While many would disagree your fate is it be lumped in a camp, more often than not, in one of three camps, the liberal, the ideologue or painfully into a facsimile of two contrastive ideological points. Sadly the people who will be most affected by watching this film are likely to be the least affected in real life by it's themes such as the dispossessed groups that the film most sees as being victimized.

The end equation rounds off with the remainder that even if the film makes some argument against the hegemony of the present system, we still view the film as a commodity on a device manufactured by slaves in China and sold to us by those who barely understand it’s message. Thus the film is itself a double bind of a commodity produced within a system that exports poverty, feudalism and segregation