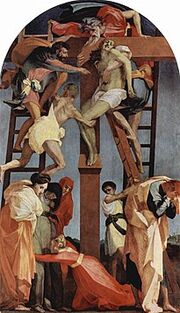 The Deposition of Christ. (Artist's rendition; he was not actually present.) It would have gone something like this when Agrawal was deposed.

WASHINGTON, D.C. -- Parag Agrawal has been deposed as Chief Executive of Twitter.

Confusion surrounds the deposition. Breitbart claims it occurred on Monday, when Twitter whistleblower Peiter Zatko blew his whistle, and that the deposition was "involuntary." However, CNN claims the act did not occur. "Sources...told CNN the dates...are not always the dates....the two sides appeared to be at odds." This would seem to be "fake news."

If Agrawal were deposed, the giant global hub for short, cryptic messages would be left leaderless against the acquisition attempt by Elon Musk. Only, Musk no longer wants Twitter. Musk has been trying to back out of the deal on the grounds that:

And CNN reported that Musk also faced deposition, which would render Tesla and SpaceX without management. Analysts say the chances are remote that each deposed leader would try to seize control of the other's former companies.

Guerrillas at the Twitter executive suite say the junta known as Libs of Tik Tok took control of Twitter once Agrawal was deposed.