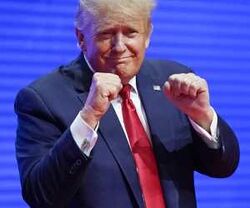 Trump insisted he is more fit that Biden and Clinton combined, and could even take on Corn Pop.

The remarks followed bombshell testimony in the trial of Michael Sussmann. Sussmann is the lawyer who told the FBI in 2020 that Trump was in cahoots with Russia's Alfa Bank. He insisted to the FBI he was acting alone — though also refusing to turn over his records because of attorney-client privilege.

Other witnesses testified that the FBI saw through the hoax in about a day, though of course continuing to investigate Trump for three years. The shoe is now on the other foot, as the Sussmann trial is the first fruit of independent prosecutor John "Bull" Durham's two-year study of the study, apart from phenomenal weekly billing.

The latest testimony is not just that Sussmann was working for opposing candidate Hillary Clinton, but that Clinton herself signed off on the work — told by her campaign manager, Robbie Mook. Mook has already written a note that whatever happened tomorrow was not a suicide. Clinton stated that she has no memory of giving the order, as she still seems to be suffering from that old bump on the noggin that rendered her unable to testify to Congress, though she is perfectly fit to be the 2024 Democratic nominee.

Trump's remark parrots Raymond J. Donovan, Ronald Reagan's Labor Secretary. In 1987, Donovan beat corruption charges and asked, "Which office do I go to to get my reputation back?" Reagan sent him to the Federal Reserve, where there is always even odds of anything. Trump told Fox he only needs his good reputation back for a short time; say, until the next time he accuses one of their stars of "having blood spurting from her — wherever", calls Hillary corrupt, endorses a candidate out of spite, or dumps him like a Georgia peach when it becomes clear he will lose by 30% and lower Trump's stellar average for picking winners.