UnNews:Horse to stand for next Tory leadership 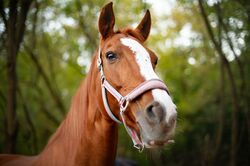 Uxbridge MP Norris The Horse is beginning to gather a colt following.

LONDON -- A big ginger horse has announced its intention to stand as the next leader of the Conservative Party, replacing Prime Minister Rishi Sunak before the next UK general election.

Norris, a sixteen-hand hunter, replaced Boris Johnson as the MP for Uxbridge and South Ruislip, after the disgraced Prime Minister was fined £20 quid for having a drink in his garden with the rest of the Front Bench, who then told the police about it.

The steed has to-date embraced a quiet life as a backbencher, helping himself to the low-hanging fruits of his constituent’s toils, as well as regularly taking them for a ride. Norris also has a lucrative career on the speaking circuit, having recently been paid 276,000 carrots for a speech to insurance companies about falls from height.

He initially plotted a bid for the top job after Liz Truss resigned, but dropped his plans because he was waiting on a farrier, having thrown a shoe in his efforts to “reach out” to his rivals – Rishi Sunak and Penny Mordaunt – with his hind legs.

Harbouring a desire to enter Downing Street with a few bales of fresh hay, Norris could pose a challenge for Sunak. He has already caused a headache by joining a Tory rebellion against the prime minister’s opposition to fossil-free transport, in lieu of Learjets and Sunseekers.

The stallion is also pawing at the ground over Sunak’s new bromance with French President Emmanuel Macron, who considers Norris and his like would be better served as lunch.

The horse’s decision to seek election, comes amid a steady stream of Tory MPs saying they will stand down. His only other real challenger, Larry The Cat, Chief Mouser to the Cabinet Office, bowed out of the race and decided to join Labour, as it’s the only party that doesn’t expose his lisp.

This won't be the first time a horse has run for political office. It last happened when Roman emperor Caligula was assassinated in 41 AD. The emperor's favourite nag Incitatus was considered as the next ruler, but lost by a nose to Claudius.