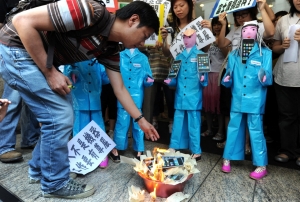 Protesters burn effigies of Apple products near the Foxconn offices in Hong Kong on May 25th. Experts are predicting that they'll probably just go out and buy new ones.

SOMEWHERE, China -- Following the suicides of "a whole bunch" of workers at some electronics factory in China over the past while, industry experts all over the world are asking the same question: How will this affect sales in the third quarter?

"This is obviously a huge blow for Apple," Richard McCormack, editor of Manufacturing & Technology News and an expert on global supply chains told UnNews. "The question now is, will consumers be able to look beyond the subhuman working and living conditions of sweatshop workers who make parts for Apple, and see the revolutionary technology of products like the iPhone and iPad? It's like having the whole internet in your pocket."

Human-rights group Amnesty International released a statement earlier today saying that Apple "only have themselves to blame" if this issue overshadows the sleek innovative products they have to offer, adding that "the iPad is the best way to experience the web, email, photos and videos. Hands down."

This controversy is in many ways reminiscent of an incident a few years ago when Coca Cola killed a bunch of trade unionists in Cuba, or somewhere like that, which lead to a 0.75% drop in sales in the following quarter. Technology bloggers have already begun to speculate whether this issue will cause a dent in the mindless acquisition of slightly upgraded consumer electronics by the baying masses.

"This public relations disaster could not have come at a worse time for Apple," blogger Ian Cook wrote yesterday. "They are just beginning to sell the iPad worldwide. I got mine earlier this week - it really is fantastic."

Others, however, such as technology blogger and self-confessed Apple fan-boy Mark Watson, are more optimistic, predicting that a consumer backlash by "a few hippies" could cause a substantial drop in the price of Apple products. In 1999, the discovery of 2000 decapitated childrens heads at a textile factory in Cambodia lead to a 15% drop in the price of The Gap and Banana Republic clothes.