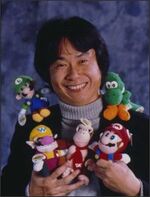 REDMOND, Washington -- The fix is in, the ballot boxes have been stuffed with only the Princess Peach ApprovedTM ones counted in what some have called the most crooked electoral process north of the state of Florida. Yes, Samus and Luigi fans, the results of the 2006 Nintendo Power AwardsTM have been released to the general public, courtesy of NintendoTM corporation rag, Nintendo Power.

Nintendo modeled its characters and games after history's greatest leaders

While there were absolutely zero surprises in this contest, with Nintendo, yet again, sweeping all the awards including; Best Gaming Company (Nintendo), Best Gaming Magazine (Nintendo Power) and GodTM (Shigeru Miyamoto for the 19th year in a row), that does not mean the announcement was released without controversy as one competitor felt slighted by the entire process, especially since none of their products were ever considered for an award.

Phantom Entertainment founder and former CEO Timothy Roberts, maker of the alleged The Phantom gaming system was outraged at the lack of representation his console recieved.

"How can anyone take this publication seriously when they only review one company's products to the exclusion of their competitors? This is outrageous! I'd cancel my subscription to Nintendo Power, if I had one, and I urge everyone to do the same." stated an outraged Roberts.

When asked what products he would like the magazine to review that his company has released, Roberts got a little agitated. "Yeah I get what your saying... we haven't released the Phantom console.... but it's coming, and it will kick the arse of all this Next-Gen crap especially that lame little Wee-wee or whatever."

Roberts was later seen outside the awards ceremony begging passersby for change for bus fare and promising them 200% return on their investment.