UnNews:Congress to decide whether Trump is a damn fool 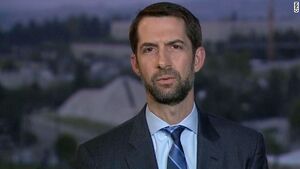 On a related note, Sen. Tom Cotton (R-Arkansas) testified that he looks like a damn fool after giving up shaving for Lent.

WASHINGTON, D.C. -- The House Intelligence Committee met on Monday to vote on whether President Donald Trump is making a damn fool of himself.

The hearings were necessary after a Hawaii judge ruled that Trump already made a damn fool of himself, in the 2016 election campaign, so completely that it is hardly necessary to read the text of Trump's Revised Executive Order because we know what he is thinking. "Haters gonna hate," the judge wrote in his one-sentence verdict blocking the order from taking effect.

Trump, without offering any evidence, tweeted that "Obama 'wiretapped' me." In contrast, the New York Times reported that Russia had thrown the U.S. election, abetted by Trump. The difference is that the Times, on the jump page, stated that evidence could emerge any day now to explain the 'wiretaps,' and maybe even why the Times knows what Trump says within seconds of him hanging up the phone. 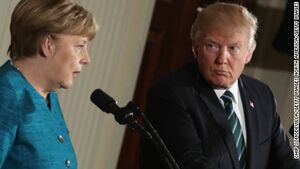 Merkel attempts to shame Trump for not having the common decency to grab a woman by the hand.

Democrats on the Committee argued that Trump accused Obama of wiretapping him because Trump sees Obama as a stereotypical cable guy because Obama is a lanky Negro who is always shuck-and-jiving and smoking cigarettes. Obama, for his part, has issued a statement that he was never on his back in the boiler room of the Trump Tower twisting a listening device onto telephone wires, though he probably offered no evidence either.

Committee members further argue that Trump made a damn fool of himself in his recent meeting with German chancellor Angela Merkel, based on one awkward moment when Trump ignored Merkel's outstretched hand.

America has known for years that Trump hates shaking hands unless there is a bucket of hot Lysol handy, and Merkel could have been trying to bait him into a predictable gaffe. But White House Spokesman Sean Spicer said his phobia does not make Trump a damn fool. Rather, he did not hear her because he was busy tweeting.

“Merkel is one hot broad! Not like frumpy Hillary. I'm so famous that I could get away with grabbing her by the pussy.”

Nor did Trump make a damn fool of himself by claiming that Germany helped the 'wiretapping.' That was the United Kingdom. Germany was the nation whose chancellor was 'wiretapped' by the U.S., revealing that she has a penchant for Egg Foo Yung. "I f...ing hate bratwurst!" she is heard exclaiming to a popular Chinese take-out in Bonn.

The first witness at the hearings was FBI Director James Comey. He testified that there was no evidence of Russian hacking, nor of Obama wiretapping, nor of Hillary committing "gross negligence" in deleting 30,000 emails before voluntarily obeying a subpoena to hand them over. In other words: Trump is the only damn fool in the room.

On the Senate side, Supreme Court nominee Neil Gorsuch will be questioned for three straight days to determine whether Senators can get him to make a damn fool of himself too. If not, they will vote against him anyway, out of concern for the rights of men pretending they are women.