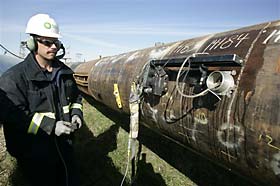 A "paleface" at Pipe Spring National Monument inspects one of the "peace pipes" left to us by the Indians.

WASHINGTON, D.C. -- The U.S. House today approved the XL pipeline, sending a clear message to energy developers that America is ready to grow again — provided you wait six years and get an Act of Congress.

"XL" is one of two keys to prosperity of the Republican Party, known as the "Party of No," which has just captured the U.S. Senate and gotten it to pass bills again. The other is Export-Import, or "XM" — the "bank" that prints dollars and sends them to places like Brazil so its airlines can buy jet engines from American companies, which makes everyone richer and does not cost a thing.

America is criss-crossed by pipelines, which were built by the American Indian before the White Man arrived. Unfortunately, the nomadic Indians would exhaust the resources in one region and move to another habitat, building an entirely new oil pipeline there. When Europeans brought their more sedentary lifestyle, Indians stayed in one place and built casinos instead of pipelines, hence the current shortage. XL will carry Canadian oil to Louisiana for refining, from which it can be sold to Venezuela, which will shortly be unable to do anything; or to Brazil, to be put in the free jet engines.

The vote on the XL pipeline marks a revival of the Indian tribal culture, in which no one can do anything until the Chief approves. Medicine Man John Boehner (Chief Orange Face) anticipates that other pipeline operators will see the move and take action to build additional pipelines. Namely, contribute wampum to re-election campaigns and send lobbyists to Washington to try to get a bill of their own passed.

Probably several, as President Obama is set to veto the first. His own vision for America's growth, to be presented in his State of the Union speech, is to give every American "universal coverage" for two free years of Community College — while they wait for their free health care. Takers would be on the hook for unspecified community service afterward, such as two-year stints in Africa in one of Mr. Obama's "outreach" programs. They could choose whether to outreach to Islam, or merely outreach to AIDS and Ebola. The funding for all the free schooling is unclear, but Mr. Obama has stated that "I have a pen and a phone" — not to mention a printing press. The White House anticipates a sixth straight Summer of Recovery.