SAN FRANCISCO, CA - In a stepped-up campaign backed by Sen. Nancy Pelosi and local school officials to encourage condom use among kindergarten children, San Francisco has introduced several strategies to make condoms readily available and fun to use.

Condom vending machines which operate on the use of tokens rather than coins are located throughout the state’s kindergarten classrooms, and children are given tokens daily. “We started out giving the kids tokens only if they behaved in class, but we decided that, in the interest of promoting safer sex, should they choose to engage in intimate activities with one another in the restrooms, in the back of the classroom, on the playground, during nap time, or somewhere else, we should distribute them indiscriminately so both good boys and girls and bad boys and girls would all be protected,” Susie Myers, a kindergarten teacher at the Height-Ashbury Preschoolers Academy, told Unnews’ reporter Lotta Lies.

Clowns pop in and out of the classrooms every 15 minutes, dressed in condom costumes, Myers said. Holding an inflated cylindrical balloon between his legs, the male clown simulates sexual behavior as he thrusts the balloon against the female clown’s crotch area. “Wear your condom!” both performers cry. Then, they distribute more tokens to the condom machines, along with hard, wrapped candy. The students love this routine. No matter how many times they see it, they think it’s hilarious, which is good, since young children learn through repetition. 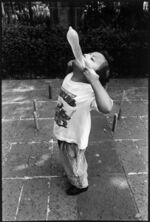 Jose Montoya, having fun with a condom

Each day, children design posters to display on classroom bulletin boards. “We usually have a theme for the designs,” Myers told Lies. “Yesterday, the theme was Condoms Are Our Friends. The children did a wonderful job. At their age, it’s easy for them to anthropomorphize anything, including condoms.”

In addition, to promote the use of condoms among their charges, the school has selected a condom as the preschoolers’ mascot. “He’s a cute, cuddly fellow named Clyde,” Myers said. “The reservoir tip is his hat.”

The prophylactics themselves are also designed to make them appealing and to encourage their use as an activity that is fun in itself. “We have flavored condoms, scented condoms, and even musical condoms. I hear that, next month, we’re going to receive glow-in-the-dark condoms as well.”

Other schools in the city employ the same or similar tactics to promote safer sex through condom use.

Despite these efforts, few of the kindergartners seem to be using the prophylactics. “My pockets are full of tokens,” Anthony Lewis, age four, told Lies, “but they give me more every day, sometimes more than once a day. I have blue ones, red ones, green ones, purple ones, yellow ones. Today, they gave me some orange ones.”

Asked why he wasn’t exchanging the tokens for condoms, he said, “I can’t reach the coin slot, even on my tippy-toes, and, besides, my pee pee won’t get hard like the ones in the funny videos that Miss Myers shows us.”

While condom use among preschoolers hasn’t increased significantly, the academic achievement of kindergarten students has declined drastically during the stepped-up condom-awareness-and-use campaign, but local school officials say that there’s “no correlation” between these statistics. “It’s just a coincidence,” Superintendent Moe Lester claimed. “We’re working to fix it. By the way, would you like a condom? I believe I have a couple of grape ones that play Yankee Doodle somewhere around here.”