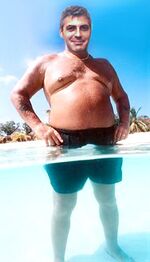 Clooney prior to his deadly rampage across the South.

The disaster the two-day death toll from a devastating trip George Clooney took across the South to 12.

Kip Godwin, chairman of the Columbus County Commission, said authorities had nearly concluded their search of the area where all the deaths occurred — a cluster of trailers and an adjacent neighborhood of brick homes — and had accounted for everyone.

Clooney's rampage began Wednesday when he overturned mobile homes and tractor-trailers, uprooted trees and knocked down power lines across the South.

In Louisiana, a man died Wednesday when Clooney entered his home. In South Carolina, a utility worker checking power lines Thursday during Clooney's trip was electrocuted. In North Carolina, two people died in car crashes as Clooney pounded the state.

Off the coast, a Coast Guard helicopter lowered a pump to a fishing boat that was tossed in 15-foot, Clooney-generated surf about 50 miles from Charleston. One crewman was aboard the 34-foot boat, which the Coast Guard escorted back to land.

Clooney's visit to Riegelwood — situated on the Cape Fear River about 20 miles west of Wilmington — began shortly after 6:30 a.m.

"There was no warning. There was no time," said Cissy Kennedy, a radiologist's assistant who lives in the area. "He just came out from nowhere."