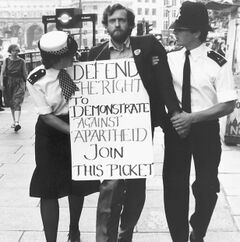 Citizen Corbyn is dragged from his latest non-peaceful demonstration, to take the helm of the opposition Party

WESTMINSTER , London -- Citizen Corbyn has won the Labour Party leadership with a landslide victory over his opponents. Commentators predict the previously unemployed Marxist, Che Guevara wannabee and petty criminal from Tooting, South London, will bring the Labour party's focus back to the “class enemy” issues of the 1960's and 1970's.

In his victory speech, a surprised Citizen Corbyn announced: “Brothers and sisters, it has been said that terror is the principle of despotic government and police state. Do the gritty working classes shudder under threat of another middle-class Thatcher, like sister Liz Kendall?

“Yes you do.” the Labour leader continued, “When the sword that gleams in the calloused hands of the working class heroes of liberty, resembles the sword with which the fascist police, and the evil fat cats of our factories are armed; the tyranny that capitalist authority represents, is liberty's despotism against that tyranny."

The Labour party feels it is in deep trouble with Corbyn, because he does not represent what the modern Labour Party is about. To the present shadow front bencher's utmost horror, it has been revealed Corbyn has the lowest expenses claims of any politician. It has also been revealed he is against Private Financial Initiatives (many of the Labour minister's alternative-pension schemes... allegedly), and has announced his new front bench will consist of an even spread of feminists in dungarees and ethnic minorities in wheelchairs. 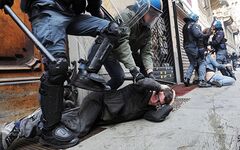 Social media however, is full of praise for Citizen Corbyn and on the streets, young single mothers and unemployed skilled workers seem over the moon. One teenage mum, Debz, who voted for Corbyn said “I don't care what they say. I have not been so excited since I found out at school, that my Dad masterminded a steelworkers strike in '74; causing days of rioting and losing almost the entire town's employment. This is the best news for Labour since the SNP banned the Torys from fox hunting again.”

Political analysts have concluded that Corbyn's back-to-the-picket-line approach to politics has engaged disillusioned Labour voters, because the electorate actually get their entire political analysis and discussion from the BBC's Radio 1 Newsbeat. Corbyn was always summarised on the show as “the honest underdog, that doesn't wear a tie”.

With the exciting prospect of the New Old Labour Party bringing the working classes back to the roots of working class values; i.e. fighting with police on the streets and throwing eggs at the wealthy managers, as they cross the picket line for their office at Cash for Gold; Citizen Corbyn remained in the headlines of the BBC's premier kids music-channel news. The other leadership candidates had missed the turn of the tide, busying themselves being clever on Radio 4, debating with Tories over the future of Barclays Bank — something that no working-class voter has ever been interested in listening to.

In the end the voters won out. They wanted someone different, making Citizen Corbyn the first minister since Tony Blair to get in touch with the the Labour electorate using the “radical ideas & no-tie routine”, even if this time it was completely by accident.