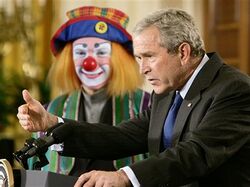 WASHINGTON DC -- President Bush, backed by "Sniffy the National Intelligence Clown," on Tuesday said it is naive and a mistake to think that the war with Iraq has worsened terrorism, as a key portion of a national intelligence assessment by his own administration suggests. He said he and Sniffy were declassifying part of the report.

"Some people have guessed what's in the report and concluded that going into Iraq was a mistake," Bush said. "But as the guy who started it, you can imagine I think they're full of shit."

Sniffy asserted that portions of the classified report that had been leaked were done so for political purposes, referring to the Nov. 7 midterm elections.

Bush announced that he had instructed Sniffy, who has been head of National Intelligence since the sweeping reforms after Sept. 11, to declassify those parts of the report that don't compromise national security or intelligence-gathering methods, or make the administration look like they have their thumbs up their asses.

Portions of the document that have been leaked suggest that the threat of terrorism has grown worse since the Sept. 11 terror attacks and the war in Afghanistan, due in part to the war in Iraq.

Democrats have used the report — written by analysts from a range of U.S. intelligence branches — to bolster their criticism of Bush's Iraq policy.

The administration does not dispute the findings, but claims only part of the report was leaked — and does not tell the full story.

Sniffy "is going to declassify the document as quickly as possible — declassify the key judgments for you to read yourself," Bush told reporters in the East Room. "And he'll do so in such a way to both protect sources and methods, and put the proper spin on it so it doesn't look like we screwed the pooch."

Using a portion of the report to attack his Iraq policy and suggest it has fanned more terrorism is "naive," Bush asserted. Sniffy agreed by loudly honking his familiar big red National Security horn.