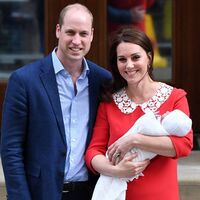 LONDON, United Kingdom -- Prince William and wife Kate Middleton have confirmed they will sacrifice their third child to ensure a Brexit trade deal with the USA. This will involve donating the yet-unnamed royal child to President Donald Trump, who will be reared as a living representative of the Special Relationship.

I have talked this over with William and Kate and we are prepared to do anything for our country to ensure a new trade deal with America, said British Prime Minister Theresa May. The young boy will be a living symbol showing the world how much we are going to love eating chlorine-washed chicken and hormone-boosted syringed beef.

The child's name has yet to be decided. Donald Trump says that he would be overjoyed if the boy were called Fred, after his father, and become a playmate for his son, Barron Trump. First Lady Melania volunteered to breast-feed the child if necessary. Trump tweeted:

This is a great deal for the USA. We're exporting a third grade actress, Democrat liar Meghan Markle, who is to marry Prince Harry Hewitt, but getting in return a genuine prince, to replace the one who died from fake opioids. This shows America is winning again under my leadership!

British Labour Party leader Jeremy Corbyn called it a bad idea, suggesting that the tiny prince instead spend the next 10 years in Cuba. Corbyn also suggested names for the newborn: Fidel, Che, or Bashar.