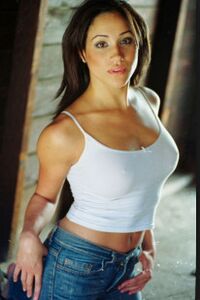 Meghan Markle (born August 4, 1981) is a Californication-born actress/model/role model who found herself a British frog and became a princess. He wasn't found in Disneyland but in the equally fancy dress obsessed Kingdom of England. He goes by the name of Prince Harry.

The couple met originally in Toronto when Harry made a guest appearance in the cheap cut Suits, a TV series set in some generic city in the USA but actually shot in Canada. Harry played the role of a drunken Rugby fan who strips naked in a restaurant and reveals how small the crown jewels are these days.

For those without comedic tastes, the so-called experts at Wikipedia think they have an article about Meghan Markle. 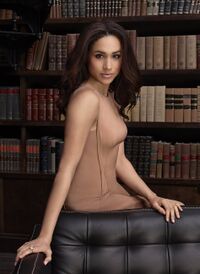 Meghan with a library of books about royal duties behind her.

Meghan Markle comes from a mixed race background. This makes her a modern Halle Berry and a lifelong Democrat. Her father left home early one day and returned 20 years later with a different family. Meghan, therefore, claims that none of these are her true folks and that is why she refused to pay them to come over and take part in her wedding.

Early on, Meghan's natural blossoming figure gained the attention of the Los Angeles pervy photographic community. She was pictured in a white vest and no bra. 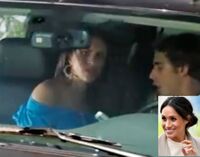 Meghan's oral breakthrough and how she remembers the scene.

Meghan Markle's role of any note was when she played a hussy teen in Beverly Hills 90210:Second Generation. She was seen blowing off Dustin Milligan in the pilot episode. The show's producers decided this was too raunchy and banished Meghan from the show. She got blacklisted and moved to Canada for work.

Meghan Markle as Rachel Zane about to seduce a suit.

In 2010 a low budget legal drama was looking for cast members. They had to be (a) cheap, (b) unknown and as the show would be shot in Canada (c) feature a lot of Canadians. This latter bit proved hard to cast and Markle (as an exile) was allowed to enlist on the show as an 'honorary Canadian' — an easier task as her screen husband Patrick J. Adams came from Toronto.

Since there we no egos on the show and everyone was desperate for a break, Suits turned out to be a steady, if dull, show. It was supposed to be me more lifelike and as it was a cable channel — a bit more raunchy. This is always hard in show made for the USA market where lawyers are treated like gods.

Markle's character as Rachel Zane got her fair share of praise. At the sametime she was going through her own legal experience by dumping her first husband Trevor Engelson. By 2013 — or in Suits season 3, they had parted company. After that Meghan apparently had no 'regular steady' — or at least, none that have gone on the record. By then it seemed likely she would eventually marry someone in property, following the regular procession of actors who often started with a fellow thespian before heading into marital real estate. Then she met a well connected ginger boy.

What are they writing about on this page Harry?

The romance started in 2016 when the couple met at a restaurant. Meghan showed Prince Harry her impersonation of Meg Ryan faking an orgasm in a cafe from When Harry Met Sally. She also told him the reason why she was in exile from the USA. Prince Harry was then on his 'moral rehabilitation tour' following his nude antics with show girls in Las Vegas and organising an active Nazi party in Buckingham Palace.

Meghan said to friends she found ginger nuts 'enthralling' and laughed convincingly at all the prince's jokes. Harry had to tell the British Secret Service that he liked Meghan but that he would wait for their full security report and recommendations before showing the size of his crown jewels. In the past Meghan would have been deemed unsuitable as she wasn't white or a virgin. Additional barriers like her faith (she had moved from charismatic christianity to Judaism but had never been a Catholic!!) were discounted as even the British Royal Family realised that they had to move with the times. Once the official clearance had been achieved, Harry and Meghan could officially play 'hunt the sausage'.

Meghan's marriage to Prince Harry was celebrated in May 2018. The wedding was billed as the 'new special carnal relationship', celebrating the political and social union of the United States and the United Kingdom. When America finally tires of their fake royal families (Kennedys, Clintons and Bushes) and wanna-be Mafia bosses (Cuono), Meghan and Harry will be in a perfect position to become the Emperors of the United States and Canada. For now, they have had to settle for the 'Duke and Duchess of Sussex' (subsidiary titles include Earl and Countess of Durex and Lord and Lady Baerebhum), which essentially means Brighton and Dementia Albion.

In 2019 the Royal couple made plans to move to the USA. This was to launch their joint celebrity career. They were going to make 2020 all about them, except that Coronavirus raised its sneezing head. That put their make-or-break year off until 2021.

In March 2021, Meghan gave the Windsors both barrels for their treatment of her in an interview with Oprah Winfrey broadcast across America. The two billionaires (the guest lamenting settling for being a mere millionaire) comparing stories of their harsh lives. Meghan's husband Harry nodded along with her. Expect them both to become American citizens only.