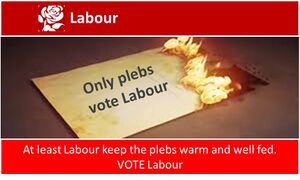 Labour marketing spun the issue with the release of a new campaign poster.

LONDON -- One hundred top corporate bosses here have written a letter to the British public declaring their support for the Conservative Party in the upcoming general election. To have a chance of the letter reaching constituents through Royal Mail's labyrinth of black holes, the executives produced millions of copies of this letter, inducing their opponents in the Labour Party to launch a renewable energy initiative to use the "scrap" paper as fuel to heat the homes of hundreds of thousands of pensioners across the United Kingdom.

"I make no bones about it, Labour is not out to back big businesses," said Labour leader Ed Miliband, "but when an opportunity to burn private property stares at me in the face, I will take the opportunity. There is enough paper here for me to entirely replace the Winter Fuel Allowance." The phrase "I make no bones about it" has become the Labour Party's new motto in an attempt to hide the unoriginal script writing of Miliband's speeches. All Labour Party candidates have been ordered to say the phrase at least four times a day to make it seem perfectly normal.

The contents of the letter make it very clear that Labour's plan to place a heavy tax on corporations will only harm big businesses. However as many point out, when Labour's plan was to relax all control on big businesses in the last Labour Government a worldwide recession soon followed. Thus not many have taken the letter seriously, apart from George Osbourne, the Chancellor of the Exchequer who was amazed at how quick the response had been to his speech given to CEOs at their reunion meeting in Eton only two days ago.

The Green Party have attacked Labour's plan to burn the paper. The Greens concede that the absolute greed of the rich makes the letters a reliable and renewable source of energy, but warn that burning the paper would cause pollution, releasing hate for the poor out into public spaces where it may irritate people. Green leader Natalie Bennett said, "Our plan is to recycle the paper in our party campaign. Passing around a letter from overpaid bosses telling voters to back the out-of-touch Tory Party will surely drive them to us."