UnNews:Black Friday projected to be more violent than Gaza conflict 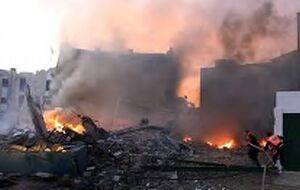 A Toys "R" Us after last year's Black Friday sale.

Meanwhile, and even greater war is brewing within the United States: The dreaded day-after-Thanksgiving 'Black Friday' sales. At least that's what is predicted in a study from the Center on Consumer Spending, who posted a YouTube video of the destruction along the Gaza strip on their website with the caption: We should be so lucky.

The new Furby is more technologically advanced and suicide-inducing than any bomb Hamas has ever built.

The CoCS report was based upon tabulations of previous years' sales, noting a sharp escalation in violence. This year is expected to be the worst yet, as cool toys and big-ass plasma television sets that Palestinian families buried under rubble can only dream about will be 97% off. Piled on (Poor choice of words?) to this is political strife, as many Wal-Mart workers are expected to go on strike in protest of long hours and wage cuts, leaving each slow, clogged store as a literal giant death box.

"Oh, it's going to be a bloodbath," said local retailer Mitch Carmichael. "And I don't mean that figuratively. Wherever you shop this Friday, expect to see a literal river of blood flowing from aisle 6 to aisle 13. I mean, sure, Israelis and Palestinians fight and kill each other over land, but that's small potatoes compared to how Americans will fight and kill each other over good bargains." He also pointed out the amusing irony that Jews, who don't even celebrate Christmas, are usually the ones who kill for good bargains. A joke which prompted nervous laughter and some uncomfortable looks from those around him.

President Obama released a generic statement: "Our thoughts and prayers go out to the families of every individual who will inevitably die this holiday weekend. As it stands, every mall from sea to shining sea is to be heavily militarized with spy drones flying about - I mean! - moderately policed at the doors beginning the afternoon of Thanksgiving for the sake of public safety. May God protect you as you help stimulate our still-struggling-but-better-than-under-Bush economy."

He concluded, "Oh yeah... also, blah blah go Israel; right to defend yourself. The check's in the mail."

Whereas the Arab-Israeli conflict is as old as the day Isaac and Ishmael first engaged in a 'yo mama' diss battle, Black Friday is a relatively recent phenomenon, yet its potential for destruction is rooted in an American consumerism far more sacred, devout and radical than the religious and nationalist beliefs of the Jews and Arabs. In quantity of violence, the pattern goes as such from least deadly to most deadly:

Peace on Earth and goodwill towards all men.